My favourite among the new apps is Adobe Debut. The problem this addresses: you want to show your client the work you have done in one of the Creative Suite apps like Photoshop or InDesign. A tablet is ideal for handing round at a meeting, but Adobe will not be porting the full Creative Suite to iPad any time soon.

The solution: Debut runs Creative Suite in the cloud and sends down static images to your device. You can even see the separate layers in a Photoshop image. 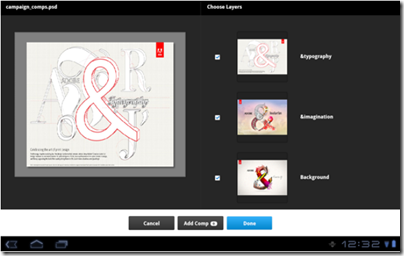 It seems to me there is a lot of future in this kind of cloud-side rendering. Provided you have an internet connection, it is an elegant and scalable solution. In Debut, it is rounded off by commenting and mark-up features. The simplicity and focus of the app may make it preferable to running the full Creative Suite app locally, though it is not so good if the client asks you to change some detail RIGHT NOW.

Note: I have not actually used the app except in a brief demo.