The Sencha blog has a great series of posts on HTML5 support on various devices. This is of direct interest to Sencha because its products are JavaScript and CSS application frameworks, Sencha Touch for mobile and ExtJS for any browser. The latest post is on the Amazon Kindle Fire – and it is weak:

The Amazon Kindle Fire doesn’t seem designed to run HTML5 apps as a primary goal. It does a good job of displaying ordinary web pages and its resolution and rendering capabilities meet that need well. But there are too many sharp edges, performance issues, and missing HTML5 features for us to recommend that any developer create web apps primarily for the Kindle Fire. The iPad 2 running iOS 5 continues to be the tablet to beat, with the PlayBook a respectable runner-up in HTML5 capabilities.

Part of the problem is that the Fire runs Android 2.3.4 (Gingerbread) which has a weaker browser than later versions. That is not the only source of disappointment though. According to Sencha’s Michael Mullany, the GPU is not used for hardware acceleration of browser content, the JavaScript timer is laggy, there is no embedded HTML5 video (videos launch in a separate player), and CSS corners are not properly anti-aliased.

But what about the Kindle’s cloud-accelerated browsing that we heard so much about when it was announced? This is the biggest disappointment:

One of the main selling points of the Kindle browser is supposed to be its cloud-caching and pipelined HTTP connection that uses the SPDY protocol. This does seem to speed up normal page browsing a little, but it’s not very noticeable and we didn’t test this rigorously. But for HTML5 web apps, where code is downloaded and executed, there doesn’t seem to be any performance difference when we tested with acceleration on and off. It doesn’t appear as if client JavaScript is executed on the server-side at all, so the Kindle does not seem to have Opera Mini-style server-side execution. And SunSpider scores were essentially the same when accelerated browsing was turned on or off.

Moving on from Kindle, it is interesting but not surprising to see a great report for HTML5 in Apple’s iOS 5. Less expected though is a big thumbs-up for HTML5 in Microsoft’s IE10 preview on Windows 8:

Simply put, (and with the caveat that we were running on the notably overpowered developer preview hardware) the IE10 HTML5 experience is one of the best we’ve seen on any platform to date. After a decade of web neglect, Microsoft is back with a vengeance. 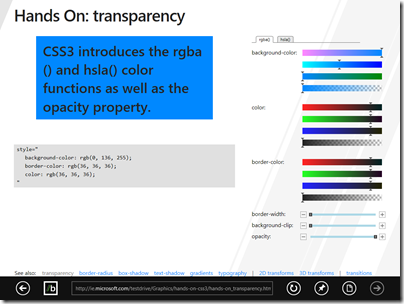 The main caveat is the absence of WebGL. Microsoft is supporting its own 3D graphics library.

Another worry for Microsoft is simply the level of hostility towards the company and IE in particular, among the developer and designer community it so much wants to reach. You can get a flavour of this from some of the comments to Mullany’s post, for example:

I never really like Windows and I absolutely despise Internet Explorer. There are so many exceptions in code to be made for Internet Explorer that i stopped trying so hard to make it look the same as other browsers. Hopefully, IE 10 will stop all of these exceptions and weird additions that are made to websites that make everything instantly awful so I can actually go back to trying to make things look nice in IE. It’s really sad though that so many people use Windows and IE that we cannot ditch it for a better system and better browser.

What about Android? The most recent offering covered in the Sencha series is Motorola Xoom which is a disaster:

We were excited about the first true Android operating system for tablets and had high hopes for a mobile browser that was as powerful as the platform. Sadly, the Xoom and Honeycomb are a real disappointment. We found consistent and reproducible issues in CSS3 Animations and CSS3 Transitions among other things. We had issues where the browser either hung or crashed. Regular scrolling was slow or below full framerate. We had issues where media playback failed or performed incorrectly. At times it felt like we were using a preproduction device, but we bought our test device from a Verizon Wireless store.

I have a hunch that the latest Galaxy Tab might fare better. Sencha did like the HTML5 support in the BlackBerry PlayBook though.

With Adobe Flash now in decline on mobile devices (Adobe is no longer working on the mobile Flash player) HTML5 support is all-important for rich browser-hosted apps; I will be watching with interest for future Sencha reports.

Microsoft has released Internet Explorer 10 Platform Preview 2 which adds a number of features. These include:
I asked Microsoft’s Ryan Gavin and Rob Mauceri why IE seems so far behind its rivals in HTML 5 support if you look at a test site such as html5test.com, where IE9 scores 141 and Google Chrome 329. I was given several reasons. The site does not cover CSS3, SVG, yet does include “specs that are still under development, specs that have been superseded by other things, you have look at what it is actually testing,” said Mauceri. He added that the site only tests for the existence of the feature rather than how well it is implemented.
Fair points, but my sense is that Microsoft, while hugely ahead of where it used to be in terms of HTML standards support, is likely behind Google and Mozilla and likely to remain so. Microsoft has a slower release cycle, and a greater burden of legacy issues to worry about.
That said, Microsoft is pushing forward energetically compared to pre-IE9 days and the new features are interesting, particularly in the light of the greater role of HTML5 which has been promised for Windows 8.
Web Workers, for example, enables more responsive web pages through concurrent programming. 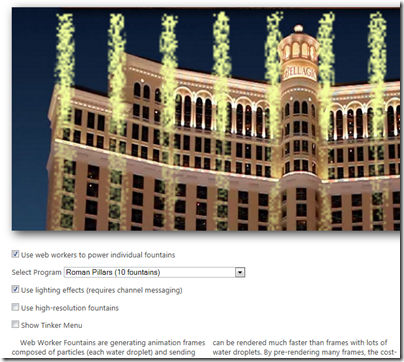 I also asked how Microsoft will enable greater access to the Windows API in Windows 8 without polluting the standards, but got the non unexpected answer “wait for the Build conference”.
No formal word on timing, but I would expect the delivery of IE10 and Windows 8 to be connected. 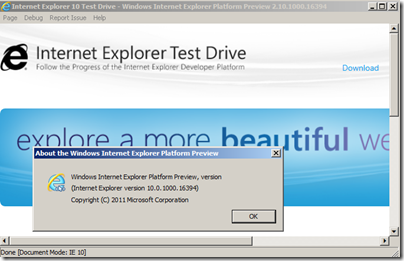