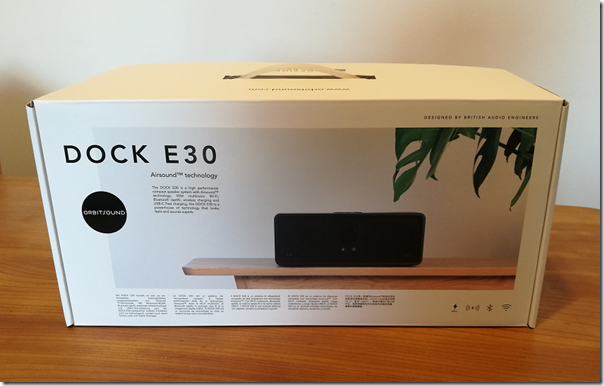 It is simple but appealing: one small box instead of all the clutter of a conventional hi-fi system. Orbtisound’s Dock E30 is also designed for today’s audio ecosystem. It supports wireless playback with Apple AirPlay, Spotify Connect, Android audio streaming over Wi-Fi, and also Bluetooth aptX and wired input via analogue or optical digital signals. There is an app for iOS and Android, and you can even dock your phone either by sitting it in the groove provided, handy for seeing cover art. You can also charge a phone using the built-in Qi wireless charging (as used by Apple), or by connecting a cable (not supplied) to a USB-C charging support. For wireless charging though you should lay the phone flat on the charging plate rather than standing it up. 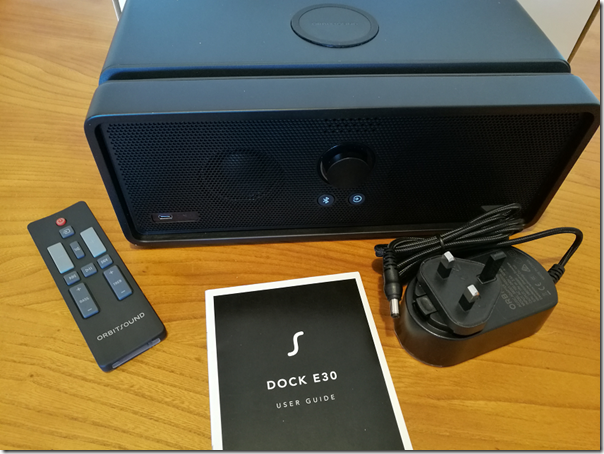 Wireless charging aside, this is all what you expect from a modern audio system; but the Dock E30 has something distinctive. This is the technology called Airsound. Orbitsound says that the problem with conventional stereo is that you have to sit in a sweet spot dead centre between and in front of the speakers to get a true audio image. “We have managed to overcome this inherent limitation in stereo by doing away with the idea of left and right channels,” says Orbitsound. What they have come up with, explained to some extent here and here, is a three-speaker system, where the sound of the main front speaker is modified by two “spatial” side speakers to give, it is claimed, a stereo experience wherever you sit. There is said to be a particular advantage when you have more than one speaker connected.

Orbitsound’s explanation of Airsound is sketchy, to say the least, but it helped me to understand the results of my listening tests. I set up the Dock E30 in my living room and tried it using various types of connection from both iOS and Android. For the main listening test though I settled on wired input for maximum consistency. I compared the E30 with several other speaker systems, including the slightly more expensive Sony SRS-X9 (now replaced by the similar SRS-X99).

First impressions are good, with a powerful bass reinforced by the passive bass radiators on the back of the unit. The power output is not specified, but I got plenty enough volume for my smallish living room. I tried walking round the room and found a good consistency of sound, though frankly the SRS-X9 which uses conventional stereo speakers was also pretty good in this respect.

How does the sound compare to that from the Sony? I found my notes contradictory at first. I felt the sound, while decent, was smoother and better defined on the Sony than on the Dock E30. At the same time, I could sometimes hear details on the Dock E30 more clearly than on the Sony. One example was the delicate guitar in the background during the intro to Steely Dan’s song Peg (which is beautifully recorded). It was more prominent on the Dock E30, even though overall I felt that the Sony had more clarity.

Pondering Orbitsound’s claim of a true stereo image wherever you sit, I pulled out a handy test track, Paul Simon’s Cars. In the middle of the track there is a little stereo effect. “You can drive them on the left” comes out of the left speaker, then “you can drive them on the right” from the right. Then Simon resumes singing in a central position.

I have to say, the Dock E30 made a complete mess of this effect. Bizarrely, the “on the right” vocal projected to the left of the image. On the Sony, everything was as it should be, so no, I had not got the channels reversed anywhere. Bear in mind that the Dock E30 only has one front-facing speaker; the other drive front-facing driver is a passive bass radiator. 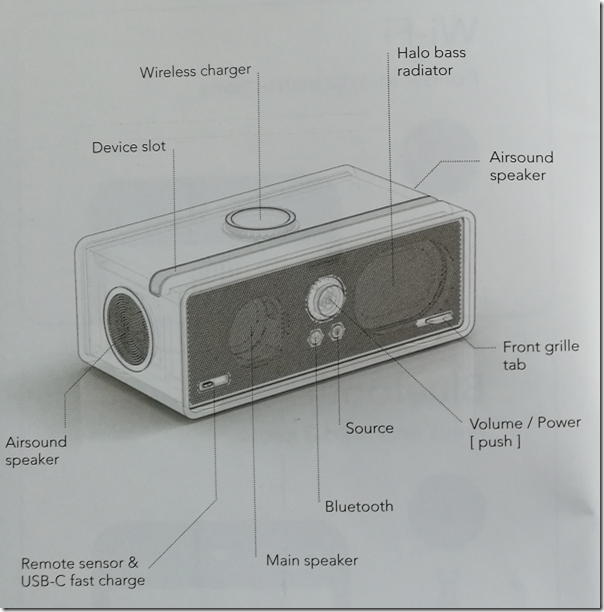 In the end this is all about processing. Orbitsound is trying to get a sense of room-filling stereo from a small box. It does this by munging the stereo signal into a mono part on the main speaker, supplemented by two spatial effects speakers that fire outwards from the left and right ends of the Dock E30, using some kind of algorithm that is not really designed to give you a true stereo image, but rather to create an illusion of depth.

This I believe explains why I found the sound perplexing at times. Some details might be brought out more prominently, others not.

You can adjust the Airsound effect by holding down mute for three seconds on the remote, then spinning the volume dial. If you adjust it for minimum Airsound, you get something close to mono. This is not a bad thing; I love my mono Squeezebox Radio. If you adjust for maximum Airsound, the sound become echoey and phasey, something which is not to my taste but might be an effect you enjoy.

Setting Airsound to minimum is close, but I would like to see an option to disable it completely and simply have mono, though that would be rather a waste of three speakers.

Listening to the stereo effects in Cars is an edge case. I found the Dock E30 enjoyable to listen to with music from classical to jazz to pop and rock. It has good bass extension, which can be excessive at times, but is easily controlled using the tone controls on the remote. Most people are not going to worry about the processing and can just listen.

Personally though I am more purist. I favour a less processed sound and prefer the clean, honest clarity of a system like the Sony XRS X9. 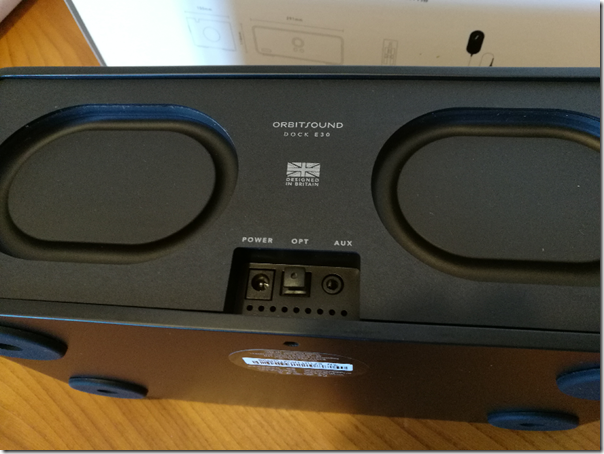 Leaving aside the Airsound debate, the Dock E30 offers good sound quality with exceptional bass for its size.

The design is subjective of course, but while it is not objectionable, there are better-looking speaker systems in my opinion. The groove on top may trap dust, and the controls on the front are not beautiful.

On the other hand, I am very happy with the flexibility of the unit. It has a generous range of inputs, both wired and wireless. The remote with its tone controls and mute button is excellent.

The ability to charge your phone is a nice bonus.

Unfortunately I am not convinced by Airsound or that this is the best use of three speaker drivers; but at the same time it is good to see some innovative thinking. I recommend that you audition before purchase.