I am doing some work on a Mac at the moment. On Windows I store passwords in PasswordSafe, an open source utility that works well, so I wondered if I could access my PasswordSafe database from the Mac. 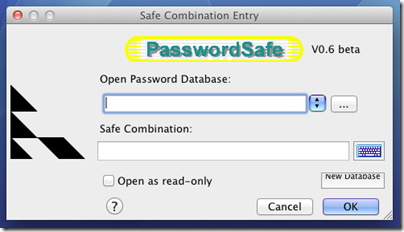 I could have run the Windows version in Parallels, which I have just installed, but I figured a Mac version would be more convenient. I didn’t see a Mac build among the downloads, but PasswordSafe is cross-platform, so I downloaded the source to do a quick compile.

I was glad to find README.MAC.DEVELOPERS.txt in the PasswordSafe source and set to work. The first task is to download wxWidgets, a cross-platform GUI library, so I went off to download that. Ran the osx-build-wx script as instructed. Result: error message stating C compiler cannot create executables.

The problem seems to be that PasswordSafe expects GCC 4.0 but the latest Xcode installs GCC 4.2. The solution suggested here is to remove Xcode 4, install Xcode 3, and then reinstate Xcode 4. There are related issues concerning PPC fat binaries and older versions of the Mac SDK.

That solution seemed risky and ardous to me, and I remembered that I still had an old Mac Mini from which I was forced to upgrade in order to install Lion, the latest OS X. I hooked it up, removed Xcode 4, installed Xcode 3, and set to work again.

I get the impression not many people build PasswordSafe for the Mac. The first issue I discovered was that the steps in in the README.MAC.DEVELOPERS.txt don’t mention that after running osx-build-wx you also have to run make in order to build static libraries. That was easy though. The next thing is to load the supplied PasswordSafe project into Xcode and build.

If anyone wants my build, it is here. There is also a Java version, and some people have success with that on the Mac.