The popular media playback app VLC is coming to Windows Phone as well as Windows tablets, according to an email sent to supporters of its Kickstarter project for VLC for WinRT (Windows Runtime).

A new preview release has been made available on the Windows Store, with the following changes:

The app is currently x86 only, and this will have to change before a Windows Phone version is possible, since Windows Phone currently runs only on ARM chipsets. The VLC developers say:

While this release is still x86-only, we’ve made great advances on the ARM port. More news soon.

The progress of apps like VLC will be interesting to watch following the release of Windows 10 next year, which (from the user’s perspective) blurs the distinction between desktop apps (like the old version of VLC) and Store apps (like this new one). Can the Store app be good enough that users will not feel the need to have the desktop version installed? Even if it is, of course, the desktop version will remain the only choice for those on Windows 7 and earlier. In fact, make that Windows 8.0 and earlier, since the new version requires Windows 8.1. 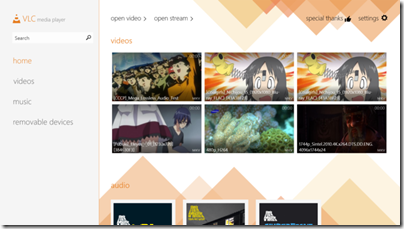