Google’s Nexus Q is a streaming device. It is a spherical object with the following connections: optical S/PDIF digital output to connect to a hi-fi, wired ethernet, USB connection for “service and support”, and speaker outputs.

The top half of the Nexus Q twists to control the volume. Tap the top LED to mute the sound.

The built-in class D stereo amplifier is 12.5 watts per channel.

There are also 32 multi-colour LEDs on the unit which blink in time to the music. This could be annoying but presumably there is a way to disable it.

You can stream music and video apparently, only from Google. This can be your own songs uploaded to Google, or purchased from the Play store.

Why would you want to stream music from the cloud, when it is already stored locally in iTunes, say, or in FLAC for a Squeezebox system? Cloud streaming can be high quality, but playing uncompressed audio over the local network is better still.

Why does not Nexus support standards like DLNA (Digital Living Network Alliance) streaming, so that you could stream to it from a variety of media servers?

Is Google really saying that you cannot control streaming to a Nexus Q with a PC, Mac, iPad or any other non-Android device? For example, I am sitting here working at a PC. Do I have to pick up my phone in order to control Nexus Q? Or run the Android emulator, I guess?

One mitigating factor: developers can install stuff on the Nexus Q via that USB connector. I am guessing then what we may see these missing features plugged by third-party efforts.

The Nexus Q has the concept of “social streaming”. What this means is that if you enable guest mode, anyone else on the network who has an Android device can also stream their music. That could be fun, or could be chaos, but it is an interesting feature.

Music shared on the device is transient, according to this Wired article:

The queue is a transient song list, and not an actual playlist. When you add a song to the queue, the Nexus Q owner can listen to the track for 24 hours, even after you’ve left.

On signing into Google Docs today I saw the following: 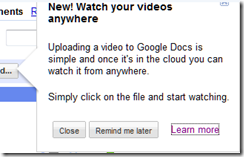 I clicked Learn more and was directed to this article. The files you can upload and play:

And how do you play a video?

Simply click a video file that you’ve uploaded to your Documents List and the video opens in a new page that includes a video player. You will need to have Flash installed for the video player to work.

At the same time, Google says it is removing H.264 support from its Chrome browser:

Though H.264 plays an important role in video, as our goal is to enable open innovation, support for the codec will be removed and our resources directed towards completely open codec technologies.

How do we make sense of this? The implication is that Google is not in fact bothered about H.264, but rather wants to promote Flash for video instead of the HTML 5 <video> element. That is a problem for Apple iOS users who cannot run Flash, and puzzling insofar as you would expect Google to be promoting rather than discouraging HTML 5 adoption.

Possibly the real target is Apple. Flash has become a key selling point for non-Apple mobile devices. By making more use of Flash, Google can make the web more annoying for iOS users and thereby promote Android.

As John Gruber observes, Google has some questions to answer.

Update: Google’s Mike Jazayeri has posted some more background on the decision here.