It is classic Microsoft. Launch something before it is ready, then struggle to persuade the market to take a second look after it is fixed.

This may prove to be the Windows Mixed Reality story. At IFA in Berlin last year, all the major Windows PC vendors seemed to have headsets to show and talked it up in their press events. This year, Acer has a nice new generation headset, but Asus made no mention of upgrading its hardware. Dell is showing Oculus Rift on its stand, and apparently is having an internal debate about future Mixed Reality hardware.

I reviewed Acer’s first headset and the technology in general late last year. The main problem was lack of content. In particular, the Steam VR compatibility was in preview and not very good.

Today I tried the new headset briefly at the Acer booth. 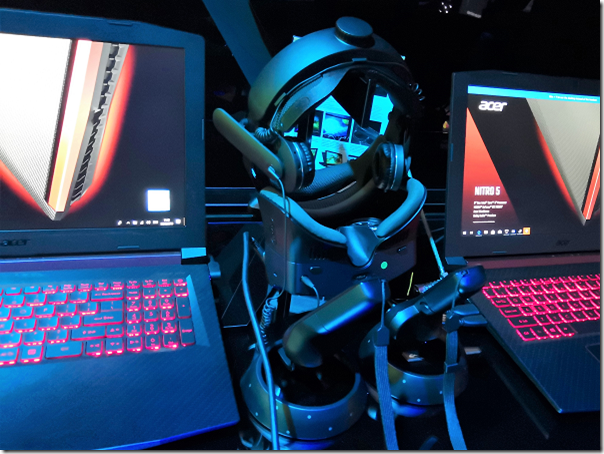 The good news: it is a big improvement. It feels less bulky but well made, and has integrated headphones. It felt comfortable even over glasses.

On the software side, I played a short Halo demo. The demo begins with a promising encounter with visceral Halo aliens, but becomes a rather dull shooting game. Still, even the intro shows what is possible.

I was assured that Steam VR compatibility is now much improved, but would like to try for myself.

The big questions are twofold. Will VR really take off at all, and if it does, will anyone use Windows Mixed Reality?

A leviathan flies above a bunch of journalists at CES in Las Vegas – no wires, but virtual reality on a big screen.

I tried these on during Microsoft’s Build conference, at the Xamarin party. No, it is not me in the picture.

No, it’s not Microsoft’s answer to Google Glass. Rather, it is the Oculus Rift, a Virtual Reality headset funded by a Kickstarter project that achieved nearly 10 times its original goal.

Unfortunately it is hard to photograph, but what you get is a view of a 3D virtual world which responds to the turn of your head. The added realism is extraordinary, even though the current model shows a slightly pixelated screen; this will apparently be fixed for the first commercial release.

There is one snag with the Rift, which is the urge to move around by walking. Not too good in as you will soon hit the wall. The developers have thought of this, and I saw a picture of a walking platform, where you walk on the spot and sensors pick up your direction of virtual travel. Unfortunately my guess is that such a platform will fail the “conveniently fits in the living room” test.

It will not necessarily be the Oculus Rift; but virtual reality is so compelling that its time must surely come. It would be utterly great with more movement sensors so that you could climb walls, engage in sword fights and so on.

Wearing a great big headset is unsocial though as the point is to immerse yourself in a virtual world. Looking like an idiot also comes with the territory. Hit or miss? Not sure.