I’ve just installed the third Internet Explorer Platform Preview (on a virtual machine just in case) and run through a few of the demos. One of the most impressive is Canvas Pad, which demonstrates the HTML 5 Canvas element. 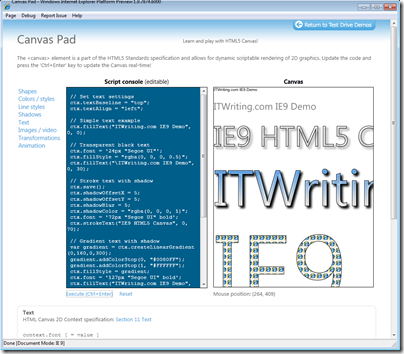 Canvas is particularly interesting, since it provides a surface to which you can draw anything you like. Canvas support was not announced at Mix earlier this year, when IE9 was unveiled, and some of us speculated that Microsoft would omit it in order to preserve the value of its Silverlight plugin – though in doing so it would also help Adobe Flash. Well, apparently the IE9 team decided to risk it. Not only is canvas supported; it is also hardware-accelerated:

Is there still value in Silverlight and Flash? There is, for several reasons. A plug-in presents a predictable runtime, insulating the application from browser variations. A plugin will work on browsers that do not yet support Canvas. Further, Silverlight includes the .NET Framework with its rich library, and supports the .NET languages, whereas for HTML5 you have to use JavaScript – though don’t forget Google Web Toolkit, which compiles Java to JavaScript, and other similar projects.

Even so, once you have hardware-accelerated Canvas there will be few occasions when you absolutely have to use Flash, Silverlight or Java.

Microsoft is doing the right thing. Crippling IE for the sake of Silverlight would only push users to other browsers, so it would not achieve its goal.

A full list of what is new in IE9 is here. It is shaping up to be the most interesting new IE since version 4.0 back in 1997.