I downloaded the toolkit for iOS and took a look. It is a start, but it is really only a toolkit for Azure storage, excluding SQL Azure. 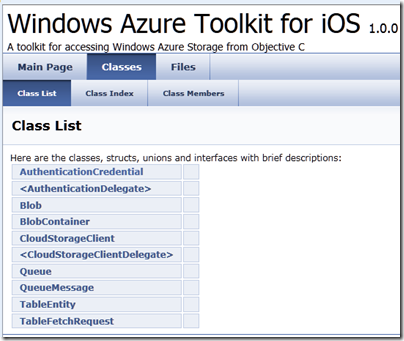 What would I hope for from an iOS toolkit for Azure? Access to SQL Server in Azure would be useful, as would a client for WCF (Windows Communication Foundation). In fact, I would suggest that the WCF RIA Services which Microsoft has built for Silverlight and other .NET clients has a more useful scope than the Azure toolkit; I realise it is not exactly comparing like with like, but most applications built on Azure will be .NET applications and iOS lacks the handy .NET libraries.

A few other observations. The rich documentation for WFC RIA Services is quite a contrast to the Doxyfile docs for the iOS toolkit and its few samples, though Wade Wegner has a walkthrough. One comment asks reasonably enough why the toolkit does not use a two or three letter prefix for its classes, as Apple recommends for third-party developers, in order to avoid naming conflicts caused by Obective C’s lack of namespace support.

The development tool for Azure is Visual Studio, which does not run on a Mac. Microsoft offers a workaround: a Cloud Ready Package which is a pre-baked Azure application; you just have to amend the configuration in a text editor to point to your own storage account, so developers without Visual Studio can get started. That is all very well; but I cannot imagine that many developers will deploy Azure services on this basis.

I never know quite what to make of these little open source projects that Microsoft comes up with from time to time. It looks like a great start, but what is its long-term future? Will it be frozen if its advocate within Microsoft happens to move on?

In other words, this looks like a project, not a strategy.

The Windows Azure Tools for Eclipse, developed by Soyatec and funded by Microsoft, is another example. I love the FAQ: 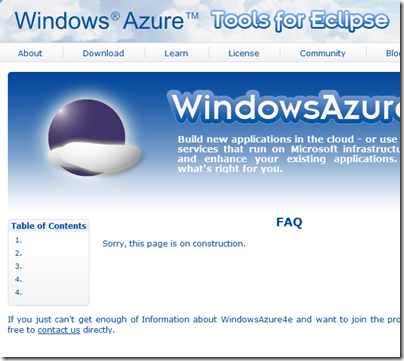 This sort of presentation says to developers: Microsoft is not serious about this, avoid.

That is a shame, because a strategy for making Azure useful across a broad range of Windows and non-Windows clients and devices is exactly what Microsoft should be working on, in order to compete effectively with other cloud platforms out there. A strategy means proper resources, a roadmap, and integration into the official Microsoft site rather than quasi-independent sites strewn over the web.

One thought on “Microsoft’s Azure toolkit for Apple iOS and Android is a start, but nothing like enough”