Microsoft’s Ted Dworkin, Partner Progam Manager, has posted details of how the forthcoming Windows Store will work. There is also detailed new information on MSDN. It is a key piece if you care about the next version of Windows, including details of how enterprises will be able to deploy apps as well as the terms of business for independent developers. 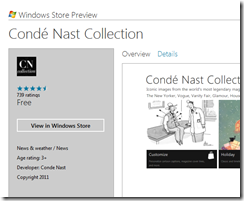 Here is a quick summary:

There is an initial beta preview period during which all apps will be free. Microsoft has also annoyed most of the world’s developers by restricting a First Apps Contest to those who:

… are a developer – professional, hobbyist, or student – and you are a legal resident of the 50 United States and District of Columbia, France, Germany, Japan, or India