Microsoft has reported a $900 million write-down on Surface RT inventory in its latest financial results. Was Surface RT a big mistake?

A loss of that size is a massive blunder, but the concept behind Surface RT is good and Microsoft should persevere. Here’s why.

Microsoft had (and has) good reason to do both of these things.

Historically, DOS and Windows prospered because it was open to any hardware manufacturer to build machines running Microsoft’s operating system, creating a virtuous circle in which competition drove down prices, and abundance created widespread application support.

This ecosystem is now dysfunctional. The experience of using Windows was damaged by OEM vendors churning out indifferent hardware bundled with intrusive trial applications. It is still happening, and when I have to set up a new Windows laptop it takes hours to remove unwanted software.

Unfortunately this cycle is hard to break, because OEM vendors have to compete on price, and consumers are seemingly poor at discriminating based on overall quality; too often they look for the best specification they can get for their money.

Further, Windows remains a well understood and popular target for malware. One of the reasons is that despite huge efforts from Microsoft with User Account Control (the technology behind “do you really want to do this” prompts in Windows Vista onwards), most users outside the enterprise still tend to run with full administrative rights for their local machine.

Apple exploited these weaknesses with Mac hardware that is much more expensive (and profitable), but which delivers a less frustrating user experience.

Apple has been steadily increasing its market share at the high end, but an even bigger threat to Windows comes from below. Locked-down tablets, specifically the Apple iPad and later Android tablets, also fixed the user experience but at a relatively low price. Operating systems designed for touch control means that keyboard and mouse are no longer necessary, making them more elegant portable devices, and a wireless keyboard can easily be brought into use when needed.

Microsoft understood these trends, although late in the day. With Surface it began to manufacture its own hardware, an initiative which alongside the bricks-and-mortar Microsoft Stores (supplying trialware-free Windows PCs) aims to counter the corrosive race to the bottom among OEM vendors.

Windows 8 also introduces a new application model which is touch-friendly, secure, and offers easy app deployment via the app store.

In Windows RT the experiment is taken further, by locking down the operating system so that only these new-style apps can be installed.

Surface RT brings both these things together, solving many of the problems of Windows in a single package.

Surface RT is well made, though performance is disappointing; it seems that Nvidia’s Tegra 3 chipset is not quite sufficient to run Windows and Office briskly, though it is usable, and graphics performance not bad.

There were several problems though.

I was in New York for the launch of Surface RT. There were “Click In” ads everywhere and it was obvious that Microsoft had convinced itself that it could sell the device in large numbers immediately. That was a fantasy. I suppose that if consumers had taken Windows 8 to heart quickly (as opposed to resisting the changes it imposes) and if the app ecosystem had flourished quickly then it could have taken off but neither was likely.

Despite all the above, Surface RT is not a bad device. Personally I was immediately drawn to its slim size, long battery life, and high build quality. The keyboard cover design is superb, though not everyone gets on with the “touch” cover. I purchased one of the launch machines and still use it regularly for cranking out Word documents on the road. 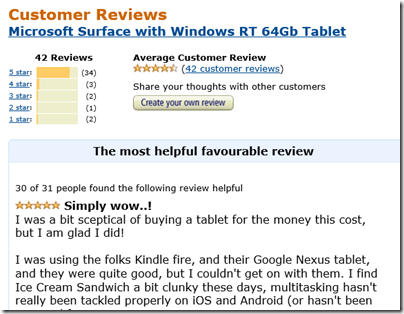 Surface RT is also improving as the software evolves. Windows 8.1, now in preview, adds Outlook and makes the device significantly more useful for Exchange users. Performance also gets a slight lift. The built-in apps are improving and app availability in general is much better than it was at launch, though still tiny compared to iPad or Android.

I have also been trying Surface Pro since receiving one at Microsoft’s Build conference last month. The Pro device has great performance and runs everything, but it is too bulky and heavy to be a satisfying tablet, and battery life is poor. I think of it more as a laptop, whereas Surface RT is a true tablet with a battery that gives pretty much a full day’s use when out and about.

Microsoft’s biggest mistake with Surface RT was not the concept, nor the quality of the device. Rather, they manufactured far too many thanks to unrealistic expectations of the size of the initial market. The sane approach would have been a limited release with the aim of improving and refining it.

I hope Microsoft perseveres both with Windows RT and with Surface RT. Give it better performance with something like Nvidia, Tegra 4, Windows 8.1, and improved app support, and it is near-perfect.

The future of Windows

Desktop Windows will remain forever, but its decline is inevitable. Even if it fails, we should recognise that Microsoft is trying to fix long-standing and deep-rooted problems with Windows through its Windows 8, Surface and Windows RT initiatives, and there is some sanity in the solutions it has devised. Despite a billion dollars thrown away on excess Surface RT inventory, it should follow through rather than abandon its strategy.

11 thoughts on “Windows RT and Surface RT: Why Microsoft should persevere”