Microsoft held its official launch for Visual Studio 2013 today, at an event in New York, although the product itself has been available since mid-October. VP Soma Somasegar nevertheless made some new announcements, in particular the availability in preview of an online Visual Studio editor, codenamed Monaco. “Developers will now be able to edit their sites directly from the web, from any modern browser, on any device,” said Somasegar on his blog.

Monaco is not intended as a replacement for the desktop IDE. Instead, it parallels what Microsoft has done with Office, which is to provide a cut-down online editor for occasional use. Monaco currently targets only web applications running on Azure, Microsoft’s public cloud platform. The technology is not altogether new, since it is built on the same base as “Napa”, the online editor for Office 365 applications. 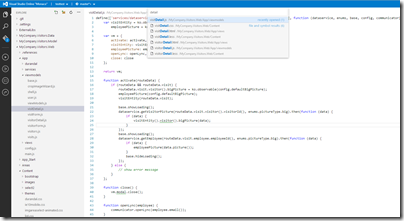 At the launch, Monaco was demonstrated by Erich Gamma, of Design Patterns and Eclipse fame, who says he uses it for real work. He assured us that it is built on web standards and compatible with iOS and Android tablets as well as desktop browsers.

Online editing with Monaco is only one part of what Microsoft now calls Visual Studio Online. The product also includes a hosted version of Team Foundation Server, offering source code control, collaboration tools, and an online build service. These features were already available as part of Team Foundation Service, which is now replaced by Visual Studio Online. If you are happy with the cut-down Visual Studio Express, or already have Visual Studio, then subscription is free for teams of up to five users, with additional users costing $10 per user/month for an introductory period, and rising to $20 per user/month.

Microsoft is also offering Visual Studio Online Professional, which bundling desktop Visual Studio Professional with these online services, for teams of up to 10 users, at $22.50 per user/month rising to $45.00 per user/month. This follows the same model which Adobe adopted for its Creative Cloud, where you get cloud services bundle with tools that run on the desktop.

Pay even more and you can get Visual Studio Online Advanced, which oddly does not include the Professional IDE, but supports unlimited users and has additional reporting and collaboration features, for $30 rising to $60 per user/month.

When does the introductory offer expire? It’s until further notice – 30 days’ notice will be provided before it ends. Confusing.

Somasegar also announced the preview of a new online service called Application Insights. This service analyses and monitors data from .NET or Java applications running on Windows Server or Windows Azure, and .NET applications on Windows Phone 8, reporting on availability, performance and usage.

Another new service is Elastic Load Test (not to be confused with Amazon’s Elastic Compute Cloud), which simulates multiple concurrent users for testing the performance and behaviour of an application under stress. This requires the expensive Visual Studio Ultimate with MSDN subscription, and offers 15,000 virtual user minutes per month, with additional virtual user minutes at $.001 each.

Finally, he announced a partnership with Xamarin to enable development for iOS and Android in C# and Visual Studio, extending the existing Portable Class Libraries so that non-visual code can be shared across different Windows platforms as well as the new mobile target platforms.

I spoke to Xamarin’s Nat Friedman about this and wrote it up on the Register here.

Microsoft’s strategy here is to persuade existing Windows developers, familiar with C#, Visual Studio, and both desktop and ASP.NET applications, to stick with Microsoft’s platform as they migrate towards cloud and mobile. In this context, the heart of Microsoft’s platform is Windows Azure and Office 365, which is why the company can tolerate iOS or Android clients.

The company will also hope that a proliferation of apps which integrate and extend SharePoint online will help drive subscriptions to Office 365.