Microsoft watchers have been scrutinising the fascinating Mini-Microsoft post on the Kin smartphone debacle and what it says about the company. If it is even slightly accurate, it is pretty bad; and it must be somewhat accurate since we know that the hopeless Kin launch happened and that the product was killed shortly afterwards. Of course it would have been better to kill the project before rather than after the launch; the negative PR impact has affected the strategically important Windows Phone 7 launch.

Handsome profits from Windows and Office have enabled Microsoft to survive and even prosper despite mistakes like Kin, or the Xbox 360 “red ring of death”, or the Vista reset and related problems – mistakes on a scale that would sink many companies.

I see frequent complaints about excessively bureaucratic management with too many layers, and a tendency towards perplexing, ineffective but expensive advertising campaigns.

There are also questions about CEO Steve Ballmer’s suitability for the task. He nearly indulged in a disastrously over-priced takeover of Yahoo, saved only by the obstinacy of the target company’s leadership. He habitually dismisses the competition, such as Apple’s iPhone, and is proved wrong by the market. He failed to see the importance of cloud computing, and even now that the company is at least partially converted he does not set the right tone on the subject. I watched his keynote at the Worldwide Partner Conference (WPC) where he sounded as if he were trying unsuccessfully to imitate Salesforce CEO Marc Benioff from ten years’ ago. Microsoft needs to present a nuanced message about its cloud initiative, not someone shouting “oh cloud oh cloud oh cloud”.

Microsoft is also copying its competition as never before. Bing has a few innovations, but is essentially a recognition that Google got it right and an attempt to muscle in with a copy of its business model – search, advertising and data mining. Windows Phone 7 occupies a similar position with respect to Apple’s iPhone and App Store. Windows 8 also seems to borrow ideas from Apple.

Nevertheless, Microsoft is not yet a dying company, and it would be a mistake to base too much analysis of the company on something like comments to Mini-Microsoft’s blog – good though it is – since it is a magnet for disaffected employees.

While Ballmer’s effort at the WPC was poor, he was followed by Bob Muglia, president of server and tools, who was excellent. Windows Azure has come on remarkably since its half-hearted preview at PDC 2008; and Muglia comes over as someone who knows what he is trying to achieve and how he intends to get there. The Azure “Appliance” idea, shipping a pre-baked cloud infrastructure to Enterprise customers, is a clever way to exploit the demand for a cloud application model but on hardware owned by the customer.

The eBay announcement at WPC was also quite a coup. eBay will “incorporate the Windows Azure platform appliance into two of its datacenters” later this year; and while it is not clear exactly how much of eBay will run on Azure, these appliance kits represent significant hardware.

We’ve seen other strong releases from Microsoft – server 2008 R2, Exchange 2010, SQL Server 2008 R2, SharePoint 2010 which whatever you think of SharePoint is a solid advance on its predecessor, and of course Windows 7 which has done a lot to rescue Microsoft’s performance and reputation after the Vista disappointment.

I also continue to be impressed by Visual Studio 2010, which is a huge release and works pretty well in my experience.

What about Windows Phone 7? With the market focused on iPhone vs Android, clearly it is in a tough market. If there is something slightly wrong with it on launch, instability or some serious hardware or software flaw, it might never recover. Nevertheless, I do not write it off. I think the design effort is intelligent and focused, and that the Silverlight/XNA/.NET development platform along with Visual Studio is an attractive one, especially for Microsoft Platform developers. VP Scott Guthrie describes the latest SDK here. People still switch phones frequently – something I dislike from an environmental point of view, but which works in favour of new entrants to the market. If Windows Phone 7 is a decent device, it can succeed; I’d rate its long-term chances ahead of HP WebOS, for example, and will be keen to try it when it becomes available. 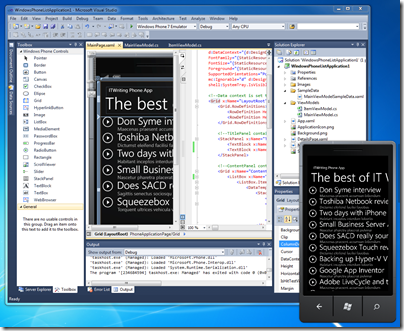 Is there a lot wrong with Microsoft? Yes. Does it need a fresh approach at the very top? Probably. Nevertheless, parts of the company still seem to deliver; and even the Windows Phone 7 team could be among them.