I’m moving an ASP.NET project to a different ISP, and rather than grill the ISP about the setup I cast around for a .NET equivalent to phpinfo(), which generates a web page giving comprehensive information about the server configuration.

The closest I’ve found so far is this Codeplex project by Aarron K Jackson. I downloaded the source, compiled (I had to delete the private key included by the author) and ran it on the new server. It did in fact answer most of my questions. Information includes the Windows and .NET version, number of CPU cores, memory available and used, environmental variables, path to the web site, IIS version, trust level, and all the server variables; there is even a test email form. 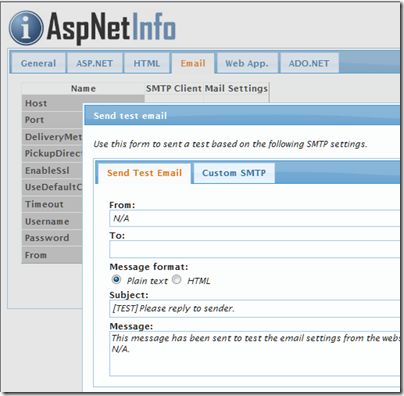 According to Codeplex the project has fewer than 100 downloads so I thought it deserved a plug. One caveat: I suggest you password-protect it or delete after use, since the information could be valuable to hackers.