Think Apple’s iPad is a consumer platform? Think again. I’m at the Cloudforce conference in London; and the level of iPad visibility has been striking. I’m not talking about attendees clutching the devices, though there are some. Rather, it’s the number of mentions and actual usage examples that are in the presentations. Before the keynote, Peter Coffee from Salesforce.com was using an iPad for interview notes, using it like a pad of paper. Next, we had demos of Salesforce.com’s new Chatter for mobile running on the iPad. Next, a representative from case study Bausch+Lomb mentioned that his company has just deployed 700 iPads to its sales force. 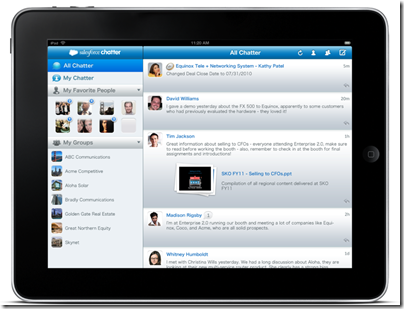 All business use cases, and all the more impressive given that they are incidental to the theme of the event.

Personally I have mixed feelings about this development. I’ve been a fan of the tablet format for years; here’s an article from 2003 (with apologies for the dated layout) in which I enthuse about an early Acer tablet. Some of the features for which the iPad is praised, like the ease of sharing what’s on the screen with others, are things I’ve long taken advantage of with Windows tablets.

The iPad is succeeding where Windows tablets mostly failed, thanks to its better design, lighter weight, longer battery life, and lower price. That’s welcome to me since I like the format, but the locked-in nature of the platform alarms me. Apple to be the single pipe for all public software deployments? No Flash, Silverlight, Java, or any runtime or other enabling software which Apple chooses not to approve?

This is merely an observation though – what counts is that users are adopting the device and enjoying what it offers them, in business as well as for personal use.

Now that Apple has shown how to make the tablet concept work, others are climbing on board, mostly with Android devices. The next point of interest is whether these also succeed; and even whether Microsoft can clamber back into the market either with a new wave of Windows devices, or more plausibly with the Windows Phone 7 OS (though the company claims not to be contemplating this).

For the moment though, broad reach deployment must include either an HTML version of your app, or native iOS.

One thought on “Apple iPad ascendant in business computing”