I took the opportunity here at Microsoft PDC to find out what Microsoft means by AppFabric. Is it a product? a brand? a platform? 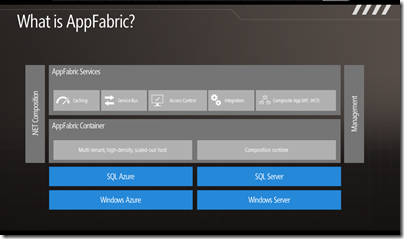 Of course if you add in the Windows Azure prefix you get a typical Microsoft mouthful such as “Windows Azure AppFabric Access Control Service.”

Various AppFabric pieces run on Microsoft’s on-premise servers, though the emphasis here at PDC is on AppFabric as part of the Windows Azure cloud platform. On the AppFabric stand in the PDC exhibition room, I was told that AppFabric in Azure is now likely to get new features ahead of the on-premise versions. The interesting reflection is that cloud customers may be getting a stronger and more up-to-date platform than those on traditional on-premise servers.