Tools company Red Gate is to discontinue the free version of .NET Reflector, a popular tool for debugging and decompiling .NET code. 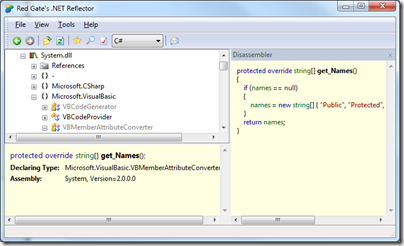 The tool itself is amazing. It takes advantage of the fact that .NET code is not compiled to native code until runtime. The code that is distributed is in .NET “intermediate language”, which means it can easily be decompiled. Reflector makes this as easy as opening a file. This is invaluable for debugging when you do not have the original source code, though a further implication is that if you want to protect your source code you need to obfuscate it.

Reflector was created by Lutz Roeder, who shared it freely with the community. In 2008 Roeder sold Reflector to Red Gate, stating:

Red Gate will continue to provide the free community version and is looking for your feedback and ideas for future versions.

Red Gate developed Visual Studio integration and some further features, offering a free version as well as a paid-for premium edition. Now it has decided this is no longer viable. Watch this video as distinctly uncomfortable CEO Simon Galbraith answers the question “Didn’t we promise that Reflector was always going to be free?”:

We’re really regretful that we ever made such a statement that we were going to try not to charge for it. In hindsight we wish we hadn’t done that. It was never a promise by the way. Two years ago we thought we could make a success of it without having to charge for it, it turns out that wasn’t the case.

Galbraith says that Red Gate had expected two benefits from Reflector: sales of other tools to Reflector users, and up-sell to the premium version. Neither has really happened, he says, adding:

We know that people are going to be cross with us.

What has particularly annoyed users in the feedback forum is that the existing free version is time-bombed, and will expire on May 30th. So users will be forced to upgrade.

i have been a happy (paying) customer of red-gate for some time now – sql tools, .net tools.
i have told many other developers of your products – happy to explain how good they are and how awesome red-gate is.
i won’t be doing that any more. IMO you have managed to destroy your company reputation such that purely on principle i won’t be recommending you to anyone anymore.

Reflector has actually been time-bombed for years. I have a download from 2008, and if I run it I get this message:

If I click Yes, I am told that automatic update is impossible and directed to the Red Gate download page. If I click No, the dialog closes. In either case, the Reflector executable deletes itself. This is not so bad if you can download another free version; but following the change of policy that will not be the case.

Red Gate might not have made money from Reflector, but now it has the opposite problem: bad PR because of withdrawing an existing and popular free tool.

The price for the new Reflector will be just $35.00; not much for such as useful tool. There is nothing wrong with a software company charging for its work. This is a difficult transition though, and the question is: would Red Gate have been better off releasing Reflector back to the community and ceasing its own investment, rather than making a renewed effort to make it a viable commercial product?

5 thoughts on “Red Gate to charge for .NET Reflector, runs into storm of protest”