Vision Mobile has published its report on mobile development. It is a detailed report and worth reading, though I would be wary about taking it too seriously since some of the results are puzzling. This is what the report is based on:

There are a few surprises. Android fragmentation is generally regarded as a problem, particularly since operators are slow or reluctant to release updates, but according to the report Android is the least fragmented platform after Apple iOS; the worst is Java ME.

Here are a couple of charts I found interesting. What kinds of apps are people paying for? 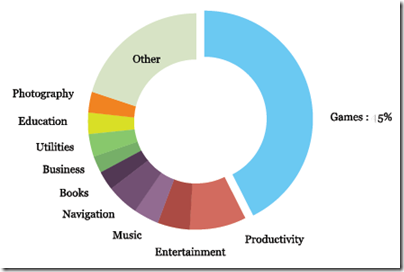 It is games that dominate, but at 45% they are still less than half of the whole. Note that these stats are based on iOS sales tracked by App Annie.

In terms of monetisation, iOS is the most revenue-generating platform according to the report, and Android well down. 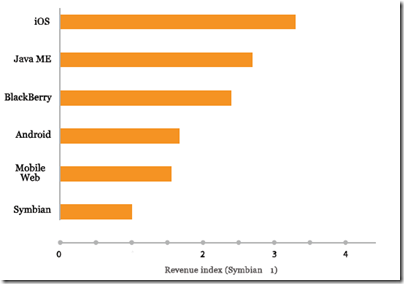 Windows Phone is too small to make this list, but the report notes:

Windows Marketplace offers a trial version for applications, which doesn’t help developers monetise from impulse purchases – a
naive differentiation move on the part of Microsoft.

There is a fascinating section on winners and losers in the mobile platform race. There is almost no correlation between number of devices shipped and the number of apps published. 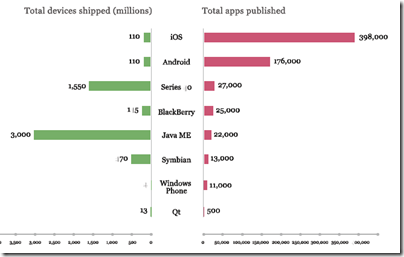 Java ME is way ahead on devices shipped; but these are feature phones for a market that buys relatively few apps.

Finally, a look at the platforms developers are planning to use, and the ones that plan to abandon. Here is the first:

Next comes a chart of platforms developers are planning to abandon: 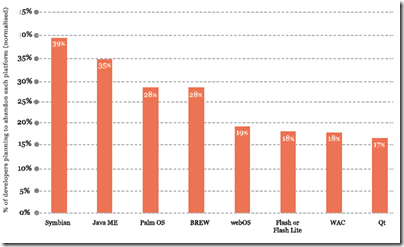 Bad news for Symbian and Java ME, and also uncomfortable reading for HP with webOS and Adobe with Flash. However, only 285 respondents for this part of the survey.

There are harsh words for Adobe. The report gives several reasons why Flash is losing the battle for developer mindshare, including the abandonment of Flash Lite and the perception that “by focusing on large business partners, Adobe has been unable to cultivate momentum among developers in the long-tail.”

Microsoft is praised for its developer tools, but the decline of Windows Mobile and “lacklustre sales” for Windows Phone raise questions over whether it can create a viable market for mobile developer. The report is not always clear about when it means Windows phones of all kinds, and when it means the new Windows Phone 7+ platform.

The report shows that actual usage of Windows Mobile and Windows Phone by developers has gone down from 39% to 36% between 2010 and 2011, while Flash/Flash Lite has increased from 22% to 34%. It is rather hard to make sense of this alongside the other figures showing platform intent and abandonment intent and again it makes me wary of the report’s accuracy.

Frankly, it is hard to discern any safe bets in such a complex market, though Apple seems to be a consistent platform from a developer perspective – provide that the company does not decide to absorb the functionality of your app into iOS itself.