I am by no means an Apple fan. For one thing, I find Windows (and Linux) stable and fast, so you are not going to hear me argue that my computing life was transformed once I made that Switch (with a capital letter). Admittedly that is partly because I am familiar with how to fix and tune Windows and remove foistware, but it is not that hard. For another, I am not an admirer of Apple’s secretive approach, or the fact that most requests for comment from journalists are responded to with silence. For a third, I dislike the notion that all apps for its popular mobile platform must be distributed through the Apple store and subject to a fee, now extended to in-app upgrades and subscriptions as well as initial sales. There is also much that I admire about Apple’s platform, but I hope I have convinced you that I am not so bedazzled by the company that I am unable to think coherently about its products.

Nevertheless, I have run a Mac alongside Windows for years now, and I find myself needing it increasingly. Here are four reasons.

The first is that sooner or later you will need to build or test an app for the Mac or, more likely, for iOS. You can only do so using a Mac (leaving aside the exciting world of the hackintosh). This is because Apple only provides the iOS SDK and simulators for its own operating system.

As an aside, I recently spoke to Keith Varty who is evangelising Windows Phone development at Nokia. I asked about the issue of Visual Studio only running on Windows, was that an obstacle for developers using a Mac? He pointed out that it is the same in reverse with Apple, you need a Mac to develop for the iPhone. In fact, it is easier to develop for Windows using a Mac, thanks to the existence of excellent PC emulators, than it is to develop for a Mac using Windows. In any case, special rules apply for Apple.

Second, other than in the most closed internal environments, some of your users will have a Mac or at least an iPad or iPhone. A few years back both developers and system administrators could get away with a deliberate ignorance of Apple computers, saying they are “not supported” or “untested” or just “I have no idea.” That is no longer acceptable (if it ever was) and it is important to test apps on a Mac where that is appropriate, as with web or cross-platform Java or Adobe AIR applications, and more generally to get a feel for how things work on a Mac so that you can respond intelligently to users.

Third, in many areas of development Macs are now dominant. This means that Windows-only developers may be disadvantaged. Today, for example, I was researching Sencha products and came across this: 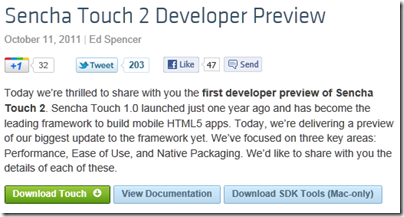 Yes, to get the preview developer tools for Sencha Touch 2, you need a Mac. No doubt Windows versions will follow, but there are times when you need a Mac just to keep up with the latest technology.

Fourth, and this is the most difficult point to make, it is valuable to spend some time on a Mac to avoid bad assumptions about usability. One example that comes to mind is version control. On Windows there is no problem using Git, or Subversion, or any number of systems including Microsoft’s Team Foundation Server installed either locally or on its own server. There is some setup involved though. On a Mac with the latest Xcode, you will find a checkbox in the new project wizard:

It is built-in. There is nothing more to do other than check this box. And yes, I know it is pretty easy to use Subversion or Git on Windows – though I would never describe a Team Foundation setup as trivial – but I am talking about the usability of a single checkbox. If you are thinking about the design of your own UI then spending some time on a Mac is though-provoking and likely to be beneficial.

By the way, some other parts of Xcode are less usable than Visual Studio so do not read too much into this example!

Another example which comes to mind is installing a web server. Windows has IIS, which is a good web server, and you can enable it on Windows 7 by going to Control Panel, Programs, Turn Windows Features on and off, and then waiting while the dialog populates, and then checking which bits of IIS you want to install: 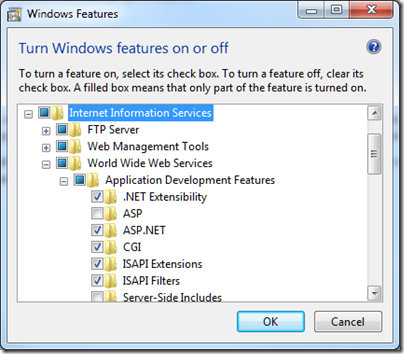 Not difficult, though the intricacies of which Application Development Features you need may require some research. But here is how you set up Apache on a Mac. Go to System Preferences, and check Web Sharing. Apache is now up and running, and on my Mac Mini it started instantly: 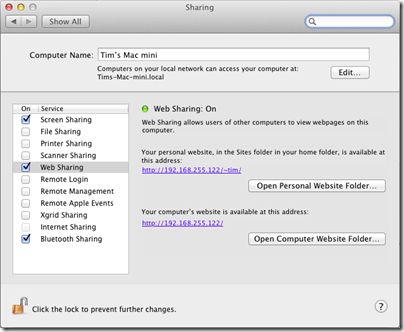 I am sure there are many more examples, and even examples where Windows has better usability than then Mac (I miss the thumbnail previews in the task bar) but my point is this: it pays to have experience beyond Windows from which to evolve your own user interface ideas.

18 thoughts on “Why developers need a Mac”