In his keynote at the GPU Technology Conference here in Beijing NVIIDA CEO Jens-Hsun Huang presented the simple logic of GPU computing. The main constraint on computing is power consumption, he said:

Power is now the limiter of every computing platform, from cellphones to PCs and even datacenters.

CPUs are optimized for single-threaded computing and are relatively inefficient. According to Huang a CPU spends 50 times as much power scheduling instructions as it does executing them. A GPU by contrast is formed of many simple processors and is optimized for parallel processing, making it more efficient when measured in FLOP/s (Floating Point Operations per Second), a way of benchmarking computer performance. Therefore it is inevitable that computers make use of GPU computing in order to achieve best performance. Note that this does not mean dispensing with the CPU, but rather handing off processing to the GPU when appropriate.

This point is now accepted in the world of supercomputers. The computer at Chinese National Supercomputing Center in Tianjin has 14,336 Intel CPUs, 7168 Nvidia Tesla GPUs, and 2048 custom-designed 8-core CPUs called Galaxy FT-1000, and can achieve 4.7 Petaflop/s for a power consumption of 4.04 MegaWatts (million watts), as presented this morning by the center’s Vice Director Xiaoquian Zhu. This is currently the 2nd fastest supercomputer in the world.

Huang says that without GPUs the world would wait until 2035 for the first Exascale (1 Exaflop/s) supercomputer, presuming a power constraint of 20MW and current levels of performance improvement year by year, whereas by combining CPUs with GPUs this can be achieved in 2019.

Supercomputing is only half of the GPU computing story. More interesting for most users is the way this technology trickles down to the kind of computers we actually use. For example, today Lenovo announced several workstations which use NVIDIA’s Maximus technology to combine a GPU designed primarily for driving a display (Quadro) with a GPU designed primarily for GPU computing (Tesla). These workstations are aimed at design professionals, for whom the ability to render detailed designs quickly is important. The image below shows a Lenovo S20 on display here. Maybe these are not quite everyday computers, but they are still PCs. Approximate price to follow soon when I have had a chance to ask Lenovo. Update: prices start at around $4500 for an S20, with most of the cost being for the Tesla board. 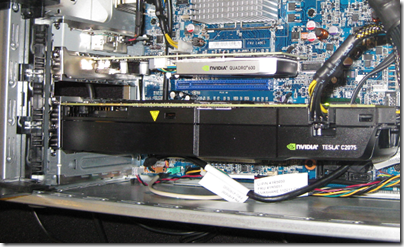