Once installed, you will see a notification each time an achievement is unlocked.

You can also check your progress via the Achievements option in the Tools menu, though mine seems slow to update. 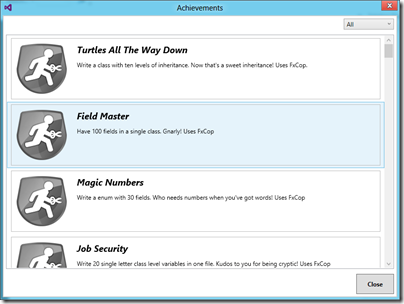 It sounds a terrible idea, though there are some entertaining ones. Here are a few I like:

Write 20 single letter class level variables in one file. Kudos to you for being cryptic! Uses FxCop

Add 10 regions to a class. Your code is so readable, if I only didn’t have to keep collapsing and expanding!

Add 10 items to a sequence diagram. You’re not just a developer; you’re an architect!

You get the idea.

Microsoft is using this to do some not-so-subtle promotion, with plenty of Windows Azure achievements, though it seems to short on Windows 8 badges as yet.

Unfortunately Visual Studio crashed shortly after I installed this extension and I am suspicious.

All pretty silly; yet I like the idea of friendly notifications when you breach some coding guideline.