After trying out Windows 8 notifications from a Windows Forms application, I did a bit of research into using the Windows Runtime (WinRT) API from desktop applications.

It turns out that this is something Microsoft planned for:

Desktop apps should for the most part be able to use WinRT. This is an area where we should have more information moving forward.

says Microsoft’s David Lamb, in Developer Support. He was answering a question about the Proximity APIs.

For this to build, you’ll need to set the following compiler switches in the the C++ Win32 Console wizard generated project:

In .NET applications you can set a reference to Windows.winmd. This is a WinRT metadata file, which you can browse in the Visual Studio object browser. 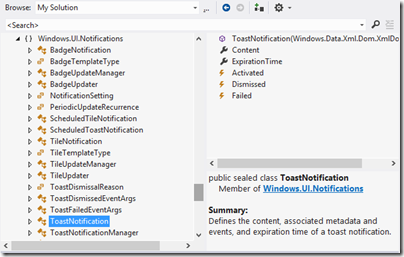 You even get a short summary describing each class and class member.

there is absolutely no (zero) il in the windows.winmd file – it’s a metadata-only assembly. This is important because winmd files only describe structure, they don’t contain code (note that the C# compiler can produce hybrid winmd files that also contain some code, this was to support certain C# scenarios)

While a lot of stuff works, there will be WinRT API calls that make no sense other than for real WinRT apps. It is also worth noting that all of this is specific to Windows 8 (and higher, I presume). Since most desktop apps will need to be compatible at least with Windows 7, this requires some care. Lamb also says:

WinRT APIs may be tied to Metro style apps, Desktop apps or potentially available to both. The documentation will list which environments (Desktop, Metro style or both) a given API works in.

and in fact you can see this in the documentation. For example, the docs for the ToastNotification class states:

whereas if you look at the ContactPickerUI class, it says:

Applies to: Metro style apps only

For those APIs where desktop use is supported, you can go right ahead.