I am in New York for the launch of Windows 8. This morning was the general launch; the Surface RT launch is to follow this afternoon. Windows chief Steven Sinofsky introduced the event. I was intrigued by how dismissive he was about a key Windows 8 issue: the learning challenge it presents to new users. He gave the impression that a few minutes experimenting will be enough, though he also referred to a guide that may be new; yesterday I picked up a small booklet which I had not seen before, introducing Windows 8.

Next Microsoft’s Julie Larson-Green and Michael Angiulo came on to show off a few details about the Windows 8 user interface, followed by Ballmer who gave what is for him a muted address about how great Windows 8 is going to be. Solid facts were few, but Microsoft did mention that over 1000 devices are certified for Windows 8.

So what is Windows 8 all about? It’s a tablet, it’s a laptop, it’s a PC we were told, in other words, everything. But everything is also nothing, and my sense is that even Microsoft is struggling to articulate its message, or at least, struggling to do so in ways that would not offend key partners.

Personally I like Windows 8, I find it perfectly usable and appreciate the convenience of the tablet format. That said, I look at all these hybrid devices and my heart sinks: these are devices that are neither one thing nor another, and pay for it with complexity and expense. Will they win over users who might otherwise have bought a MacBook? I am doubtful.

Windows RT and Intel Atom devices are more interesting. If Microsoft and its partners can push out Windows 8 devices that inexpensive and work well on tablets without keyboard clutter, that is what has potential to disrupt the market.

That brings me on to Surface. It is all in the body language: the conviction that was missing from the Windows 8 keynote in the morning was present in the Surface keynote in the afternoon. Even the room was better, with stylish Surface fake pavement art in the corridor and smart white seating. 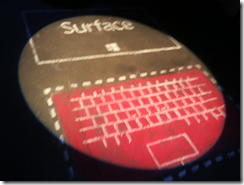 General Manager Panos Panay showed off little details, like the way the rear camera angles so that it is level when the Surface is set on its kickstand. He talked about Microsoft’s drop tests, claiming that they had tested 72 different ways to drop a Surface and designed it not to break. He demonstrated this by dropping it onto a carpet, which was not too challenging, but the fact that Sinofsky successfully used it as a skateboard was more impressive. 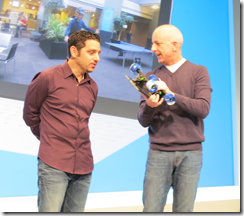 No doubt then: Microsoft has more enthusiasm for Surface, described by Panay as “the perfect expression of Windows”, than it does for the 1000 certified devices from its partners, though the company would never admit that directly.

What is the significance of Surface? It goes beyond the device itself. It will impact Microsoft’s relationship with its hardware partners. It embodies an Apple-like principle that design excellence means hardware designed for software designed for hardware. It shows that the “OK but nothing special” approach of most Windows hardware vendors is no longer good enough. If Surface is popular, it will also introduce demand for more of the same: a 7” Surface, a Surface phone, and more.

Despite its quality, the success of Surface is not assured. The biggest problem with Windows 8 now is with the lack of outstanding apps. That is not surprising given that the platform is new, and you would think that users would make allowance for that. On the other hand, they may lack patience and opt for better supported platforms instead, in which case building app momentum will be a challenge.