He and others spoke about the key features of Server 2012 and how it justifies Microsoft’s claim that it is the cornerstone of the Cloud OS.

It is a strong release; but after the event I asked Snover what he thought about a problem which is at the micro-management level, far removed from the abstractions of cloud.

The Windows event log, I observed, invariably fills with errors and warnings. Many of these are benign; but conscientious administrators spend significant effort investigating them, chasing down knowledgebase articles, and trying to tweak Windows Server in order to fix them. It is a tough and time-consuming task.

When, I asked, will we see an edition of Windows Server that does a better job of eliminating useless and unnecessarily repetitive log entries and separating those which really matter from those which do not?

[I realise that the Event Viewer makes some effort to do this but in my experience it falls short.] 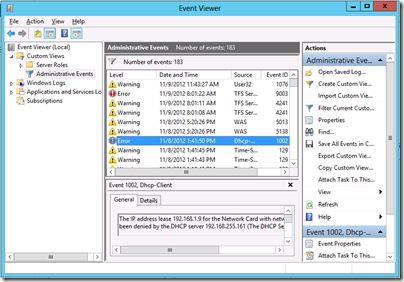 That’s hard he said. It will take a long time.

Which is better than saying that the problem will never be solved; but you wonder.

I also realise that this issue is not unique to Windows. Your Linux or Mac machine also has logs full of errors and warnings. There is an argument that Windows makes them too easy to find, to the extent that scammers exploit it by cold-calling users (generally not server admins) to persuade them that they have a virus infection. On the other hand, ease of access to logs is a good thing.

What is hard is discerning, with respect to any specific report, whether it matters and what action if any is required. One reason, perhaps, why we will always need system administrators.