A post by Ahmet Alp Balkan on working as a developer at Microsoft has stimulated much discussion. Balkan says he joined Microsoft 8 months ago (or two years ago if you count when he started as an intern) and tells a depressing tale (couched in odd language) of poor programming practice. Specifically:

There are a couple of points to emphasize. This is one person in one team which is part of a very large corporation, and should not be taken as descriptive of Microsoft programming culture as a whole. Balkan’s team is in “the test org”, he says, and not making product decisions. Further, many commenters observe that they have seen similar at other organisations.

Nevertheless, some of the points chime with other things I have seen. Take this post by Ian Smith, formerly a Microsoft-platform developer, on trying to buy a Surface Pro at Microsoft’s online store. From what he describes, the software behind the store is of dreadful quality. Currently, there is a broken image link on the home page. 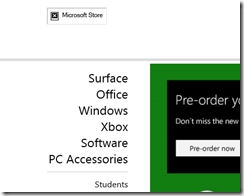 This is not how you beat the iPad.

Another piece of evidence is in the bundled apps for Windows 8. The more I have reflected on this, the more I feel that supplying poor apps with Windows 8 was one of the worst launch mistakes. Apps like Mail, Calendar and Contacts on the Metro-style side have the look of waterfall development (though I have no inside knowledge of this). They look like what you would get from having a series of meetings about what the apps should do, and handing the specification over to a development team. They just about do the job, but without flair, without the benefit of an iterative cycle of improvements based on real user experience.

When the Mail app was launched, it lacked the ability to see the URL behind a hyperlink before tapping it, making phishing attempts hard to spot. This has since been fixed in an update, but how did that slip through? Details matter.

A lot is known about how to deliver high quality, secure and robust applications. Microsoft itself has contributed excellent insights, in books like Steve McConnell’s Code Complete and Michael Howard’s Writing Secure Code. The Agile movement has shown the importance of iterative development, and strong communication between all project stakeholders. Departing from these principles is almost always a mistake.

The WinRT platform needed a start-up culture. “We’re up against iPad and Android, we have to do something special.” Microsoft can do this; in fact, Windows Phone 7 demonstrated some of that in its refreshing new user interface (though the 2010 launch was botched in other ways).

Another piece of evidence: when I open a Word document from the SkyDrive client and work on it for a while, typing starts to slow down and I have to save the document locally in order to continue. I am not alone in experiencing this bug. Something is broken in the way Office talks to SkyDrive. It has been that way for many months. This is not how you beat Dropbox.

In other words, I do think Microsoft has a problem, though equally I am sure it does not apply everywhere. Look, for example, at Hyper-V and how that team has gone all-out to compete with VMWare and delivered strong releases.

Unfortunately mediocrity, where it is does exist, is a typical side-effect of monopoly profits and complacency. Microsoft (if it ever could) cannot afford for it to continue.

6 thoughts on “Microsoft and mediocrity in programming”