The announcement that Microsoft CEO Steve Ballmer will retire “within the next 12 months” prompts some quick reflections on Ballmer and the state of his company.

Ballmer suffers from lack of charisma on stage, and this combined with missteps like failing to compete effectively in mobile devices, nearly buying Yahoo at a ludicrous price, the Kin debacle, making far too many Surface RT devices, and the poor reception overall for Windows 8, means that Ballmer’s time as CEO may be judged harshly. 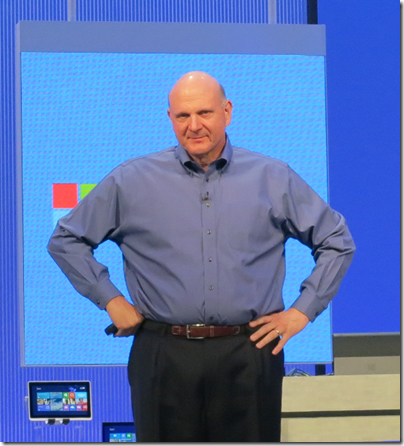 Many commentators seemingly forget that Microsoft’s financial results under Ballmer have been generally excellent. Further, if we blame Ballmer for the various blunders that occurred during his time as CEO, we should also credit him for the successes, like Windows 7, the steady improvements in Windows server, and the market success of Xbox versus Sony PlayStation (though not forgetting the red ring of death nor the numerous loss-making quarters for entertainment and devices).

Nor would it be correct to portray the Ballmer years as conservative turn-the-handle profit making from Windows and Office. Under Ballmer, Microsoft is transitioning towards the cloud with Office 365 and Windows Azure (with considerable success), and he was willing to take bold steps with both Windows (“reimagined” in Windows 8) and Office (moving towards a subscription model).

It is worth noting too that by all accounts Microsoft is not an easy company to direct. From my perception, its overly bureaucratic and somewhat dysfunctional management style was allowed to develop under former CEO Bill Gates, and while you can blame Ballmer for failing to fix it, the last reshuffle shows his effort to pull the company towards a more collaborative and efficient way of working:

We are rallying behind a single strategy as one company — not a collection of divisional strategies. Although we will deliver multiple devices and services to execute and monetize the strategy, the single core strategy will drive us to set shared goals for everything we do. We will see our product line holistically, not as a set of islands. We will allocate resources and build devices and services that provide compelling, integrated experiences across the many screens in our lives, with maximum return to shareholders. All parts of the company will share and contribute to the success of core offerings, like Windows, Windows Phone, Xbox, Surface, Office 365 and our EA offer, Bing, Skype, Dynamics, Azure and our servers.

What should the new CEO, and Ballmer in his final months, do now? I will refer to you to this interview with Scott Guthrie about what happened when he was reshuffled, along with several other Microsoft execs, to take on Windows Azure. Just to remind you, Azure was not a success when first launched, being both difficult to use and poorly presented by Microsoft.

We did an app building exercise about a year ago, my second or third week in the job, where we took all the 65 top leaders in the organisation and we went to a hotel and spent all day building on Azure," said Guthrie. "We split up everyone into teams, bought a credit card for each team, and we said: ‘You need to sign up for a new account on Azure and build an app today. It was an eye-opening experience. About a third of the people weren’t able to actually sign up successfully, which was kind of embarrassing. We had billing problems, the SMS channel didn’t always work, the documentation was hard, it was hard to install stuff.

“We used that [experience] to catalyze and said: ‘OK, how do we turn this into an awesome experience?’ We came up with a plan in about four to five weeks and then executed.”

Azure was based on decent technology, but prior to the changes Guthrie describes, it was a relatively hostile platform for developers. Put another way, it was not so much the strategy that was wrong, as the way it was executed.

I recall similar comments from the former Windows chief Steven Sinofsky about how Windows 7 was designed, based on what users found annoying in Windows Vista.

Something I see frequently at Microsoft is good ideas poorly executed or spoilt by errors of detail, and Ballmer could have done more to insist on higher standards. Recently I have been working with Office 365, and while the underlying platform is strong, working with it can be infuriating. It needs Guthrie’s approach: get people to try the product, watch what goes wrong, and fix it.

Microsoft’s devices and services strategy makes a lot of sense but the company needs more attention to detail to make it work.

One thought on “On Steve Ballmer and Microsoft’s future”