Lenovo and SweetLabs announced a deal yesterday whereby the Pokki app store and Start menu replacement will be pre-installed on Windows PCs.

This has been widely interpreted as a response to user dissatisfaction with the Windows 8 Start screen, which replaces with the hierarchical Windows 7 Start menu with a full-screen tiled view of application shortcuts. The press release, though, focuses more on the app store element:

Apps are dynamically recommended in the Pokki Start menu, app store, and game arcade to users by SweetLabs’ real-time app recommendation system, which matches the right apps with the right users. This system has already served one billion app recommendations this year, and the addition of Lenovo substantially extends the reach of this distribution opportunity for app developers looking to be promoted on brand new Windows 8 devices. 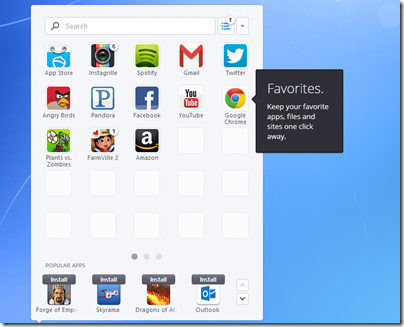 In other words, this is not just an app launcher but also a form of adware or if you prefer a third-party app store; the apps it installs will not be Windows Store apps running in the tablet-friendly Windows 8 environment, but desktop apps.

Microsoft could benefit I suppose if users concerned about missing the Start menu buy Windows 8, but in every other respect this is a retrograde step. Users who do want a Start menu would be better off with something like Start8 which will not nag them to install apps, which makes you wonder if Lenovo’s motivation is more to do with a lucrative deal than with pleasing its users. Microsoft’s strategy of building momentum for its own Windows 8 app store and platform will be undermined by this third-party effort.

Once again this illustrates how the relationship between Microsoft and its OEM partners can work to the detriment of both. The poor out of the box experience with Windows has been one of the factors driving users to the Mac or iPad over the years, and this is in large part due to trialware bundled by partner vendors.

Windows 8 is a special case, and there is no doubting the difficulty long-term Windows users have in getting used to the new Start screen. The new Start button in Windows 8.1 will help orient new users, but Microsoft is not backing away from Live Tiles or the Start screen. Lenovo’s efforts will make it harder for users to adjust, since they would be better off learning how to use Windows 8 as designed, rather than relying on a third-party utility.

Microsoft has Surface of course, which despite huge writedowns is well made and elegant, though too expensive; and this has not pleased the OEMs who previously had Windows to themselves.

It all makes you wonder if the famous gun-wielding cartoon of Microsoft’s organization chart should now be redrawn with the guns pointing between Microsoft and its hardware partners. After all, Windows Phone might also have gone better if the likes of Samsung and HTC had not been so focused on Android.