It’s that time of year. I keep more than I should, but now and again you have to clear things out. I don’t promise to dispose of all of these though: they remind me of another era, when software came in huge boxes packed with books. 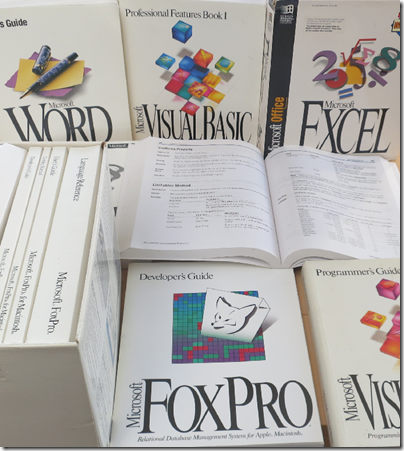 If you purchased Microsoft Office, for example, you would get a guide describing every feature, as well as an Excel formula reference, a Visual Basic reference and so on.

If you purchased a development tool, you would get a complete language reference plus a guide to the IDE plus a developer guide.

The books that got most use in my experience were the references – convenient to work on a screen while using a book as reference, especially in the days before multiple displays – and the developer guides. You did not have to go the way the programmer’s guide suggested, but it did give you a clue about how the creators of the language or tool intended that it should be used.

Quality varied of course, but in Microsoft’s case the standard was high. When something new arrived, you could learn a lot by sitting down with just the books for a few hours.

What happened to manuals? Cost was one consideration, especially as many were never opened, being duplicates of what you had already. Obsolescence went deeper than that though. Manuals were always out of date before they printed, especially when update distribution was a download rather than a disk sent out by support (which means from the nineties onward).

Even without the internet, manuals would have died. Online help is cheaper to distribute and integrates with software – press F1 for help.

Then add the power of the web. Today’s references are online and have user comments. Further, the web is a vast knowledgebase which, while not wholly reliable, is far more productive than leafing through pages and pages trying to find the solution to some problem that might not even be referenced. In many cases you could post a question to StackOverflow and get an answer more quickly.

Software has bloated too. I am not sure what a full printed documentation set for Visual Studio 2013 would look like, but it would likely fill a bookshelf if not a room.

When software companies stopped sending out printed manuals, the same books were produced as online (that is, local, but disk-based) help. Then as the web took over more help went to the web, and F1 would either open the web browser or use a help viewer that displayed web content. There are still options for downloading help locally in many development tools.

Nothing to miss then? I am not so sure. It strikes me that the requirement to deliver comprehensive documentation was a valuable discipline. I wonder how many bugs were fixed because the documentation team raised a query about something that did not seem to work right or make sense?

Another inevitable problem is that since documentation no longer has to be in the box (or in the download), some software is delivered without adequate documentation. You are meant to figure it out via videos, blog posts, online forums, searches and questions.

A good documentation team takes the side of the user – whether end user, developer, or system administrator, depending on context. They write the guide by trying things out, and goad the internal developers to supply the information on what does and does not work as necessary. That can still happen today; but without the constraint of having to get books prepared it often does not.

5 thoughts on “Do you miss manuals? Why and why not …”