At CES in Las Vegas yesterday, CEA Director of Industry Analysis Steve Koenig presented data and predictions on global tech spending trends. The figures come out of CEA Research and are based on sales tracking at retail outlets around the world supplemented by other data. 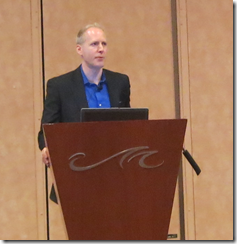 This being CES, I was expecting a certain amount of hype around how consumer technology is changing the world, but in fact Koenig’s presentation was matter-of-fact and somewhat downbeat. He said that the overall consumer tech spending trend is flat, with rising spend in emerging markets (especially China) more or less making up for declining spend in mature markets, which he says is due to market saturation. His figures show 2% growth in spending in 2013 but a 1% decline in 2014. Given the uncertainty of this kind of forecast, let’s call it flat.

The “market saturation” factor is a point to ponder. It suggests that technical devices are “good enough” for longer. It also suggests that overall the new gadgetry on show at CES is not sufficiently exciting to persuade us to spend a higher proportion of our income on consumer electronics.

Looking at his figures though, it is not just a matter of saturation. Another factor is device convergence. We are spending less on cameras and camcorders because a smartphone is good enough. We are spending less on printers because there is less need to print stuff; we can view it on a tablet. We don’t need a SatNav any more; we use a smartphone (or it is built into the car’s dashboard). In fact, we are loving our smartphones and tablets so much that spending on almost any other kind of tech is in decline. Here’s the slide showing how these mobile devices are forecast to account for 43% of consumer tech spending in 2014: 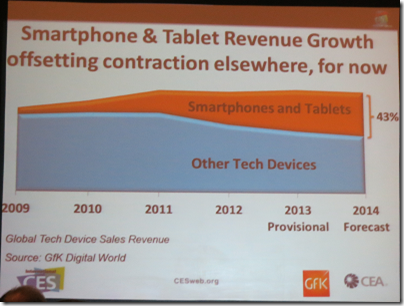 Spending on smartphones is forecast to increase by 9% in 2014, and on tablets 6%. Almost the only other broad category for which significant revenue growth is forecast in 2014 is video games consoles, thanks to the launch of new generation Xbox and PlayStation boxes (maybe Steam boxes too). That is a product cycle, not a long-term trend. Personally (my thoughts, not Koenig’s) I reckon games consoles will decline thanks to competition from smartphones, tablets and smart TVs. Global TV sales are expected to increase by 2% in units.

The other big picture trend identified by Koenig is the reduction in the average selling price (ASP) of smartphones and tablets. Smartphone ASP is down from $444 in 2010 to $297 in 2014. 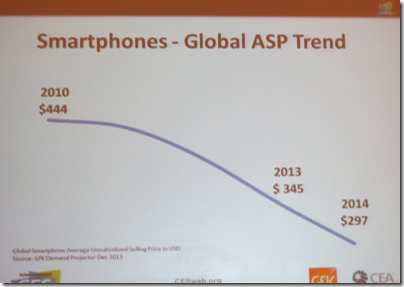 This trend is partly because the quality of cheaper devices has improved, but also because the emerging markets which are spending more are also markets that want lower prices. Taken together, this translates to a significant shift towards the low end. Overall, CEA forecasts that tech spending in developing markets, primarily on low end devices, will equal tech spending in mature markets for the first time in 2014. 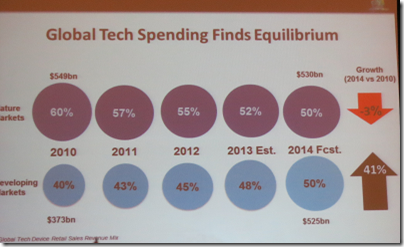 Of course this is largely an Android story. I will add though some reflections on what has happened with Windows in the light of these trends. Microsoft was right to adapt Windows for tablets, but if you look at how Windows 8 was launched there was too much focus on the high-end, trying to copy Apple rather than compete with Android. That was a mistake, and it is only recently that OEMs like Asus, with its T100 Windows 8.1 tablet, have started to come out with decent low-end devices. Nokia on the other hand has done exactly the right thing with its Lumia Windows Phones, building market share with excellent low-end smartphones. Whether that momentum will be sustained following Microsoft’s acquisition will determine the fate of the phone platform.

Finally, note that forecasting the future is never easy and this time next year the picture may look quite different.