Google announced its Chrome browser in September 2008. Its stated goal was to run web applications better:

What we really needed was not just a browser, but also a modern platform for web pages and applications, and that’s what we set out to build.

Chrome was a hit, thanks to easy install, fast performance, and Google’s ability to advertise it on its own search pages and web applications (as well as some deals with OEM Windows vendors). Today, Chrome is the most popular browser worldwide, according to figures from Statcounter covering desktop, tablet and console browsers: 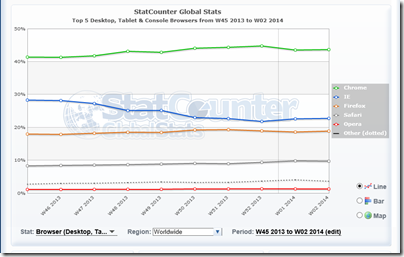 Most of those users are on Windows. Statcounter also reports that Windows worldwide has a 79.1% market share worldwide – not quite dead – though Windows 8 has a measly 7.29% share, just behind OS X.

Note that these figures are for usage, not current sales, which is one reason why Google’s Chrome S is lost somewhere in “other”.

Today though we are seeing the force of Google’s intention to introduce a “modern platform for web pages and applications”. Chrome version 32, which comes as an automatic update for most users, no longer has the look and feel of Windows. It has thin scroll bars that lack the standard single-step arrows: 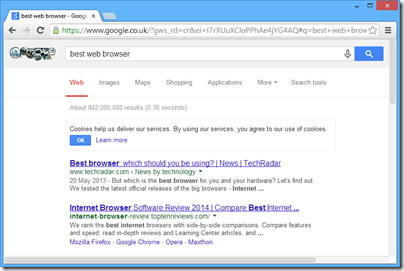 If you choose the new “Windows 8 mode” which you will find on the Chrome menu, you get something which is neither like desktop Windows, nor like Windows 8. Instead, it is ChromeOS, injected into Windows. 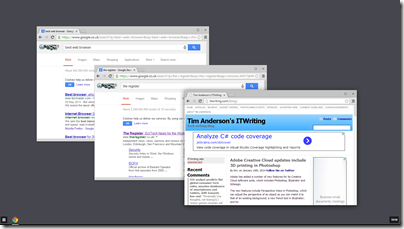 Chrome’s “Windows 8” mode only works if you set it as the default browser, and if you choose the Windows 8 mode you lose the desktop version until you select “Relaunch Chrome on the desktop” from its menu. 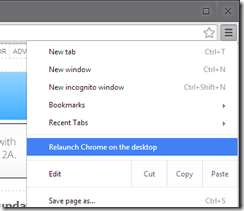 What is the effect of “Windows 8 mode”? It has several advantages for Google:

However, considered as a “modern” style Windows 8 app, it is poor. It is not touch friendly, it is multi-window, and it ignores the conventions of Windows 8 apps – this is really Chrome OS, remember.

Users are not impressed. The thing they hate most is losing the paging arrows on the scroll bars. Check the long comment thread here. For example:

This is ridiculous, and the "just deal with it" from some developers is really grating. I am -terrified- of when my Chrome will update because even using this page now I’ve used the sidebar & steppers. I have vision problems and I fear this update will make Chrome unusable for me. I’m using Windows and should have my scrollbar harmonised with Windows instead of an operating system I do not use.

This is a strategic move though and unlikely to change. Here are the key official statements in that thread. Here:

This is because we’re switching to the chromeos style. Passing to review-ui to make sure they are ok with this.

There is no easy way to go back to the previous scrollbars. There was a big change in the graphics stack from chrome 31 to chrome 32 which meant to unify 3 platforms: windows, chromeos and linux and that includes a shared widget theme.

Chrome may lose a few users to IE or Firefox, but it takes lot to get people to switch browsers.

The purpose of this post is to highlight Google’s strategy, rather than to pass judgement on whether or not it is a bad thing. It is part of a strategy to kill the Windows ecosystem, oddly echoing Microsoft’s own strategy of “Embrace, Extend, Extinguish”:

"Embrace, extend, and extinguish", also known as "Embrace, extend, and exterminate", is a phrase that the U.S. Department of Justice found was used internally by Microsoft o describe its strategy for entering product categories involving widely used standards, extending those standards with proprietary capabilities, and then using those differences to disadvantage its competitors.

Speaking personally though, if I am running Windows then I want to take full advantage of Windows, not to have it morph into another OS to suit the goals of a competitor.