When Visual Studio 2012 was first previewed, it presented a new IDE style which featured all-caps menus and a mainly monochrome icon set which most developers disliked; the icons were too hard to distinguish. Microsoft has tweaked the design, restored more colour, and I hear fewer complaints today, but that essential design approach remains in Visual Studio 2013. 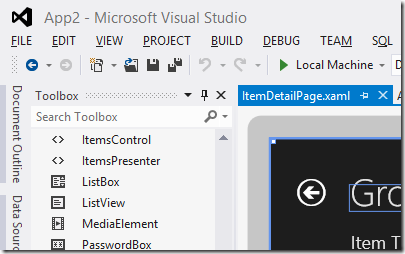 Microsoft product manager Brian Harry has made some frank comments on what happened, in a series of comments beginning here. The comments were made last month, but I had not seen them until today and consider them worth highlighting.

“The implementation of the new UI in 2012 was a mess” says Harry, explaining that the team assigned to create the new look was too small. Worse, it was too secret. “To aggravate this folly, there was a bit of a "cone of secrecy" around the new UI because we didn’t want it "leaking".  Even I didn’t get to see it until months into it,” he writes.

After a strong negative reaction to the preview, “we eventually came to realize we had a crisis on our hands,” says Harry:

Could we have reversed direction, of course.  We debated it vigorously – and for a while, I have to admit, I wasn’t sure.  Ultimately, I concluded that the only way was forward (not that it was actually my decision but I’m just stating my position).  I know some people will disagree with me emphatically and I respect that.  I am in the camp of people who generally like the new UI style.  I know some people think there aren’t any people in that camp but I’ve seen the survey’s and there actually are quite a lot of them.  I do believe there is continued room for improvement and we made some improvements over the past year (the Blue theme, for instance, is very popular – actually Dark is too; Light, not so much).  I’ve gotten completely used to all CAPS menus.  They never bothered me much and now, it just looks normal to me.  Contrast has gotten better.  Icon color has gotten better.  Icon shapes have gotten better.  I’d, personally, still like to see more liberal use of color (Team Explorer is mine and you can see we are a bit more liberal with color than much of VS :))  But all in all, I like the new UI and generally, people internally are happy with it too.

It was a journey and we made mistakes a long the way.  I think the biggest learning was – Don’t kid yourself into thinking you can do a ripple effect feature like that "on the cheap".  Another learning, for me at least, is secrecy is bad – it lets problems fester until they become crises.  Share, share, share.  The feedback is critical to course correction.

Now some observations of my own. My sense is that the flaws in the design stem from over-application of the content-first, “immersive UI” concept which is also seen in Windows 8 “Metro” or “Modern” apps. This concept makes perfect sense if you are browsing the web or reading a document: you want the screen furniture and tools to get out of the way as far as possible. If you are creating content though, the tools become more important. Arguably they become part of the “content”, if you define that as what you are focusing on.

I see the same design error in Microsoft Office 2013, which has a washed-out UI similar in many ways to that in Visual Studio 2012. If you are using Office mainly to consume content, it makes sense, but Office is a content creation tool, and the icons should be more prominent.

I am not sure of the logic behind all-caps menus except that they look vaguely modern and industrial; everybody knows that ALL CAPS is harder to read than lower case or mixed case, so this makes little sense to me.

In neither case is it that big a deal: I can still work productively and you get used to the UI.

Finally, you can tell from Harry’s remarks that the development team at Microsoft went all-out to try and please developers while also satisfying whatever corporate goals (misguided or not) were behind the new style. Kudos to them.