Microsoft has transitioned its cloud storage service name from SkyDrive to OneDrive.

Is OneDrive just cloud storage though? Not really. It is part of a suite of cloud applications. Go to OneDrive, drop down the Create menu, and you see this: 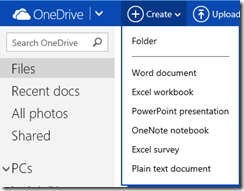 These links to Office document types open in Office Online, formerly Office Web Apps, which is a browser version of Microsoft Office, and now pretty good. 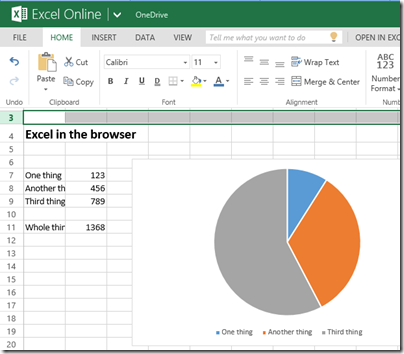 No offline functionality, and if you print you just generate a PDF, but not bad for free.

Drop down the OneDrive menu and there are the other apps in Microsoft’s consumer cloud suite, including Outlook.com, People and Calendar.

The functionality parallels that in Office 365, where you get Exchange online in place of Outlook.com and hosted SharePoint in place of OneDrive.

Microsoft also has Skype, which is the consumer version of Lync in Office 365.

It all looks rather coherent, though Microsoft has a bit of work to do under the covers. It makes little sense for OneDrive to use different technology than SharePoint for online storage, though frankly OneDrive beats SharePoint in some respects so it would be good to see some of the consumer tech migrating into the enterprise offering. Lync and Skype are also separate products though work is under way to bring them together.

Microsoft’s big problem is this. To what it extent can it continue to improve the browser-based apps before it threatens its desktop Office business? Its dilemma is that if it holds back the browser versions, it will cede market share to Google which has no qualms about crushing Microsoft Office.