First, a quick tour. App Studio is carefully described as a tool for building “content-based apps”. The personal use case is an app to show off your recent holiday, favourite band, movie or team, and for businesses, a showcase for your company or a menu for your restaurant.

I find this curious. What is the point of this kind of app? If I want to create a fan project, wouldn’t a mobile-friendly web site or blog be better? And for businesses, what is the value of an app that lacks intelligence? For example, a restaurant might want an app linked to a loyalty scheme where you collect points towards a free meal or qualify for offers, but how many will want an app just to check a menu, which they could easily do online?

Still, I like the idea of an app that will make it easier to read this blog on Windows Phone, so I went in and built an app.

Microsoft is continuing its peculiar and infuriating aversion to proper documentation, but there is a a how to that is somewhat informative. “You can also create a custom action”, it says, but does not tell you what such an action can do or how to use it.

That said, the development environment is reasonably intuitive. There is no interface builder at the level of buttons and listboxes; rather, you drag high-level elements into sections and the user interface is built for you. For example, I added an RSS feed, entered the URL for this blog, and it built a UI to browse and read blog entries. 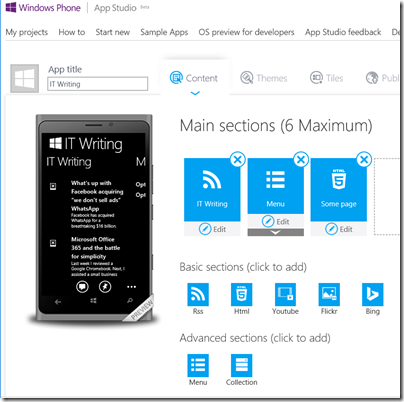 Everything is data bound, and the data can be stored either locally or else hosted by Microsoft, in which case you can amend it dynamically:

App Studio Data Services means the data is stored in App Studio and depends on an internet connection. If you update your data in App Studio, your app will automatically update. This allows you to create live apps that don’t need to be updated when you want to change data.

Large or sophisticated data sets are not the target here though. You could store a short list of addresses, for example.

You can also add elements including HTML text, RSS feeds, YouTube videos, Flickr photos, and Bing searches. You can add actions including initiating a phone call or email, searching Nokia music, or getting directions from Nokia HERE maps.

As you work, a live preview of the app appears alongside your work, a nice feature.

Once done, you can generate the app. 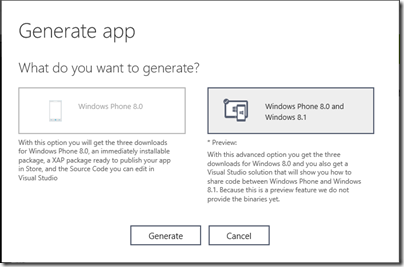 New in this version is the ability to generate a Windows Store App for Windows 8.1, as well as a phone app. Once in Visual Studio, you can do what you like, though there is no way back to the visual builder. Apps generated use XAML and C#. 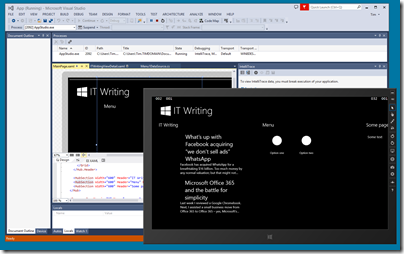 App Studio also compiles a Windows Phone binary package (not yet for Windows Store apps) which you can install immediately, provided you have added the necessary certificate. You can install the app by scanning a QR code. 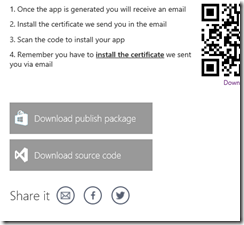 There is good work here, and if by any chance you do want to build a “content app” of the type envisaged, it is great.

I have a couple of reservations though.

First, it is too limited to be useful for real-world apps, unless you just use it as a starting point for a Visual Studio project. It needs the ability to write snippets of code, and the ability to link to business data sources like Azure Mobile Services and SQL Server. It also needs a login facility supporting at least Office 365 and Microsoft IDs.

Second, it seems to me that Microsoft is working simultaneously on several projects with overlapping purpose, which is to simplify app building.

Project Siena is a visual app builder implemented as a Windows 8 app; I looked at it here.

Visual Studio Lightswitch is a visual app builder in Visual Studio, which builds apps for Silverlight and HTML.

Access 2013 Web Apps let you build custom databases that hook into Office 365. I looked at these here. This is one easy app builder that really makes sense to me, allowing reasonably sophisticated data models and using Office 365 identities for log-in and permissions.

Now, I appreciate that there are slightly different target markets in each of these. Lightswitch cannot build store apps, Access Web Apps require SharePoint or Office 365, Project Siena cannot build phone apps, and so on.

However, Microsoft needs to unify its development platform, and a proliferation of tools all going for the supposed non-technical app developer is not helping its cause. I also suspect that the demand for consumer “content-based apps” is vanishingly small.

Personally I think Microsoft should both improve and shout from the rooftops about the under appreciated Access 2013 web apps, scrap at least two of the other three, and integrate their functionality so that we have one easy to use app builder that can target Windows Store apps and Windows Phone apps.