Microsoft has completed its acquisition of Nokia today, a milestone in the turbulent story both of Nokia and of Windows Phone, which Nokia adopted in the hope of establishing a “third ecosystem” to challenge Apple iOS and Google Android.

Rumour has it that the Nokia acquisition was controversial within Microsoft and a large factor in the departure of Steve Ballmer as CEO. However, even if Microsoft took the view that an independent Nokia was better for Windows Phone, it faced the risk that market pressure would drive Nokia to Android and weaken the platform. The beginnings of that process may have been under way, with the launch of the Nokia X Android-but-not-Google range of phones, but we will never know, since Microsoft decided on acquisition. 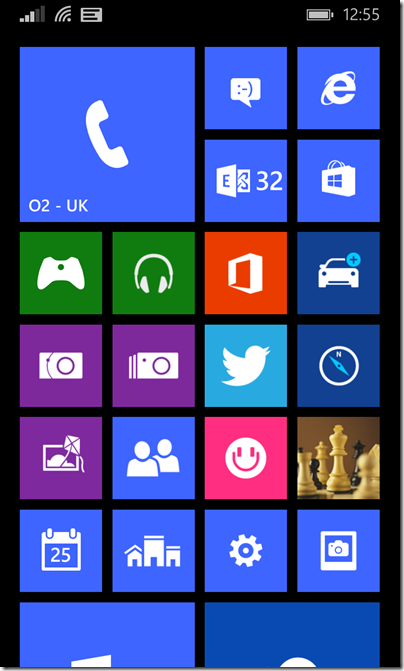 How important has Nokia been for Windows Phone? In my view, life-saving. Before Nokia, there was no manufacturer nor operator which really cared about the platform, and it showed in lacklustre hardware and half-hearted marketing efforts. Nokia came up with the distinctive Lumia brand and style, added a decent mapping service, and with its focus on the PureView camera technology, gave enthusiasts a reason to take a close look at its devices. It also saw an opportunity at the low end, and created some great value devices that opened up a new market for the operating system.

There were some blunders (the original Lumia 800 suffered many faults and terrible battery life on launch) and Lumia did not grow fast enough to restore Nokia to health, but to my mind it was a good effort.

Today, the general opinion of Windows Phone is that it is a strong smartphone operating system but suffers from a lack of high-quality apps. Users have to put up with the fact that most app vendors feel they are done if they support iOS and Android; and if there is a Windows Phone version of their app, it is often poor. That is not a great position for Microsoft/Nokia to be in, but it could be worse. Blackberry 10, which is also a decent mobile operating system, has been all-but written off as a viable contender.

Microsoft is fortunate in that, unlike Blackberry, it can to some extent create its own ecosystem. Office 365, Bing, OneDrive, Nokia’s maps, Azure for developers needing a cloud back-end: taken together they form a viable alternative. In this respect, Microsoft actually has an advantage over Apple, which lacks this breadth of services.

I have been reading the latest Developer Economics report from Vision Mobile. It is a good example of the neutral perspective on Windows Phone, though you will find it somewhat inconsistent:

Windows Phone sales picked up significantly in Q3 2013, showing a 140% increase year-on-year, fuelled primarily by low-end device sales. According to Kantar, Windows Phone sales in the three months running to Oct 2013, reached double-digit figures in some Western European markets. While this is certainly a positive sign for Microsoft they will continue facing an uphill struggle, in an increasingly unfavourable race against the two runaway leaders, iOS and Android.

The report emphasises that iOS and Android have won the mobile OS wars, but says that there are signs of hope for Microsoft:

Windows Phone Developer Mindshare has finally moved upwards, following positive market signals in the last two quarters. As we have frequently highlighted in past reports, the developer intent has always been there, with Windows Phone figuring at the top of our Developer Intentshare chart, but needed positive market signs in order to convert this interest into Mindshare. While the 26% Developer Mindshare is still less than half of that for iOS, Microsoft can now claim that over a quarter of developers that target mobile platforms are now actively developing for Windows Phone. […]

As a latecomer to a mobile market dominated by strong network effects, establishing a credible footprint in mobile remains a formidable challenge
for Microsoft. We believe that Microsoft may be better served in the long-run by leveraging the Android ecosystem as the deployment platform for Office
and Server businesses which are still growing.

Microsoft is in fact supporting iOS and Android as clients for its cloud services, as noted again at yesterday’s financial webcast, where CEO Satya Nadella talked about a strategy that goes across “devices some ours, some not ours.” It is a bit of both though, and the company is not showing any signs of weakening its own mobile efforts.

In my view reports like that from Vision Mobile miss a couple of factors. One is that Windows and Windows Phone are converging. They already use the same OS kernel, and at the Build conference earlier this month Microsoft announced Universal Apps that will run on both, and the ability for developers to sell an app once and have users install on both phone and full Windows.

This means that the future of Windows Phone and that of Windows itself are closely bound together. Longer term, they will either both fade away, or both succeed.

Windows remains a huge business for Microsoft, despite the decline of the PC, especially in business. Microsoft’s problem though is that adoption of Windows 8 has been relatively weak, and that those who do use it, largely live in the desktop environment rather than running Store apps (of which Universal Apps are a variant).

Despite the dismal progress so far for the Store apps platform and ecosystem, I believe it should be taken seriously. On paper it has many advantages, not only for touch control, but also in deployment, security, roaming data driven by the cloud, and discoverability through the store. Isolation from the core operating system protects users against the things that destroy desktop Windows, like unwanted extras foisted on users who simply need to update Java or Flash.

At Build we saw not only Universal Apps, but also a preview of Office in the Windows Runtime (Store app) environment. We also saw a preview of Store apps running within a window in the desktop environment, solving the jarring transition between desktop and Store app environments that unsettles users. If Microsoft gets this right, both Windows Phone and Windows tablets will be substantially more attractive.

Microsoft also has the ability to bind Windows Phone into its enterprise device management environment, System Center and InTune. In Windows Phone 8.1 the device management and security features businesses need are much improved. More is still needed; but the company should be able to build integration points that make it attractive to business customers already using products such as Active Directory, Microsoft Office, Office 365, System Center or InTune.

Another factor is the strength of Visual Studio for developers, especially as Microsoft improves its integration with cloud services like Azure and Office 365. You can use C# everywhere from cloud or server to mobile client. 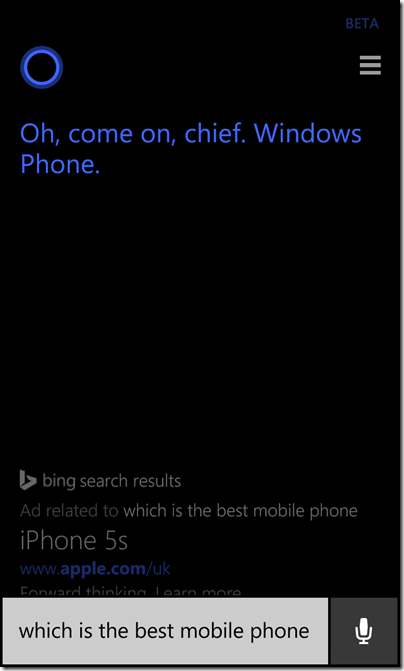 Cortana is sure that Windows Phone is the best; but check out the Bing ad.

What then is the future of Windows Phone? Uncertain, as ever; but if Microsoft pulls off a smooth Nokia acquisition – leaving in place the things that enabled the company to build the Lumia brand – and if it delivers on the promise we saw at Build, of a strong unified platform, then I expect market share to continue to grow. If it can climb to 10% or 15%, it will be on the map for vendors and the app problems will ease.

On the other hand, if Microsoft/Nokia means a return to the ineffective marketing and strategy we saw before Nokia adopted Windows Phone, then I expect Windows Phone to follow Blackberry into oblivion.

I am positive, but Microsoft needs to execute carefully and quickly to win market share for its mobile platform.