I attended an event in London which was a kind-of UK launch for Windows Phone 8.1. The first Lumia device running 8.1, the Lumia 630, is now on sale, though this was not the main focus. It was more about asking businesses to take another look at Windows Phone (and Windows tablets), following improvements Microsoft has made. The company is particularly pleased with a new white paper from MobileIron, a well-known company in mobile device management, praising the new security and manageability features:

Windows Phone 8 did not meet the stringent policies some enterprises required for protecting corporate data and resources. The release of Windows Phone 8.1 changes the game. Microsoft is delivering a rich new feature-set for business users, and providing IT departments with the compliance and security they require. These new security and management features, called the Enterprise Feature Pack, are included as a core component of Windows Phone 8.1. When combined with an enterprise mobility management (EMM) platform, these capabilities make it much easier for enterprises to adopt the Windows Phone platform.

Fair enough, though from what I can tell Windows Phone is still struggling to get the momentum it needs. Too many companies perceive that if they support iOS and Android then that is it, job done, as evidenced by this advertisement I saw recently. This in turn dampens sales. It is an unfortunate position to be in, particularly given the good work Microsoft (and Nokia) has done on the phone OS itself. I prefer the Windows Phone user interface to that in Android, but still need an Android device in order to try out new apps.

This could change if Microsoft can continue gradually bumping up its market share, but it is tough. The wider company is now side-stepping the problem by focusing on its strengths in Office, Active Directory and Office 365, and offering first-class support for these on iOS and Android, as evidenced by the excellent Office for iPad launched earlier this year.

There is a dilemma here though. Some Windows Phone users choose the phone because they feel it will work best with Microsoft’s business platform. Could the “any device” policy end up undermining Microsoft’s efforts to promote Windows Phone?

I put this to Chris Weber, Microsoft’s Corporate Vice President of Mobile Device Sales, who has come to the company from Nokia (before which he was at Microsoft, so a true Windows veteran). 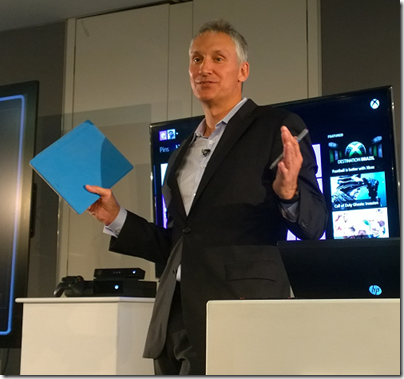 From a business perspective, providing cloud services, management, security, it is a multi-platform world. It is a great business decision for Microsoft to be multi-platform. Customers demand it as well.  That doesn’t mean we don’t want to create the most compelling platform and set of devices that bring Windows to life. I think the cross-platform thing is a great story … but the benefit of us [Nokia and Microsoft] coming together is now we have hardware, software and services that can be integrated in a totally different way, and we’re one of the few players that have all those components. The level of integration is much greater on the Windows platform. For example, Office is built in, you don’t have to go to a store and download it. The Linq client is built into the calendar. The email client, being able to have rights protection. The mail client itself is the best of any of them. The ability to access a SharePoint site across the firewall without a VPN connection, unique to Windows Phone.

Then we also have to win the end user. We have to win IT and those requirements, but you also have to get end users excited. Things that you see in 8.1, like Cortana, there’s a huge benefit there. And we’re bringing that across every price point.

Fair points; yet currently the iPad has a better touch-friendly Office than Windows tablets or Windows Phone; and Windows phone users have frustrations where the integration falls short. One remarkable thing, for example, is that there is no way to use a shared Exchange or SharePoint calendar on Windows Phone other than in the browser, so no integration with the built-in calendar or offline support.

What Weber describes, near-perfect integration between Windows mobile devices and Microsoft’s server applications, should be the case though; making this even better should be a high priority for CEO Satya Nadella’s new Microsoft.

Weber makes the bold claim that he can convert any user to Windows Phone, but says the challenge is to make this happen at retail level, when the customer wanders in looking for a smartphone:

If you give me fifteen minutes, I think I can convince any iPhone or Android user to move to Windows Phone. We have to do this not in fifteen minutes but in probably a minute and a half, at retail, with people who are selling multiple devices and are used to selling the competitor platform more than us.

Focusing on enterprise integration is in my view long overdue, and a few large enterprise adoptions would give Windows Phone a significant boost. At retail though, my guess is that Microsoft’s main hope is what Nokia did so well: delivering a good smartphone experience in budget devices – the “every price point” to which Weber refers.

4 thoughts on “Having it both ways: can Microsoft equally back Windows Phone and “Any device”?”