Amazon Web Services has announced an updated AWS Mobile SDK, which provides libraries for mobile apps using Amazon’s cloud services as a back end. Version 2.0 of the SDK supporting iOS, and Android including Amazon Fire, is now in preview, adding several new features:

Amazon Cognito lets users log in with Amazon, Facebook or Google and then synchronize data across devices. The data is limited to a 20MB, stored as up to 20 datasets of key/value pairs. All data is stored as strings, though binary data can be encoded as a base64 string up to 1MB. The intent seems to be geared to things like configuration or game state data, rather than documents.

Amazon Mobile Analytics collects data on how users are engaging with your app. You can get data on metrics including daily and monthly active users, session count and average daily sessions per active user, revenue per active user, retention statistics, and custom events defined in your app.

Other services in the SDK, but which were already supported in version 1.7, include push messaging for Apple, Google, Fire OS and Windows devices; Amazon S3 storage (suitable for any amount of data, unlike the Cognito sync service), SimpleDB and Dynamo DB NoSQL database service, email service, and SQS (Simple Queue Service) messaging.

Windows Phone developers or those using cross-platform tools to build mobile apps cannot use Amazon’s mobile SDK, though all the services are published as a REST API so you could use it from languages other than Objective-C or Java by writing your own wrapper.

The list of supported identity providers for Cognito is short though, with notable exclusions being Microsoft accounts and Azure Active Directory. Getting round this is harder since the federated identity services are baked into the server-side API. 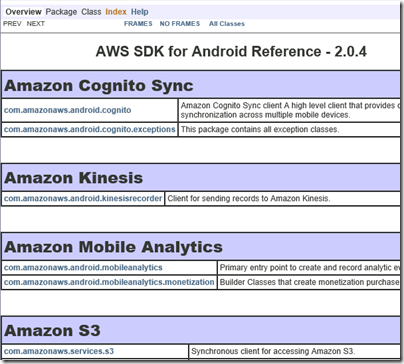