There are a number of dark areas in Windows that do not work quite right. MAXPATH anyone? But here is another one that I have only recently become aware of.

If you use applications such as Mozy, OneDrive (Business or Personal), Adobe Creative Cloud, Tortoise (a developer utility) or Dropbox, you will be familiar with the idea of files in Explorer showing little icons to indicate their state: synced, not synced, in conflict, excluded and so on.

A common complaint is that while everything still works, the little green ticks (or whatever) no longer appear.

The reason for this is simple, if depressing. Well, there are two reasons. One is that Windows has a limit of 15 overlay icons. If more than that are specified (by multiple applications) then anything over the limit does not work.

The second is that multiple applications cannot apply overlays to the same file. So if you tried to set up your Tortoise repository in a OneDrive folder (do not do this), one or other would win the overlay battle but not both.

The overlay configuration is stored in the registry, at HKLM\Software\Microsoft\Windows\CurrentVersion\Explorer\ShelliconOverlayIdentifiers\

If you visit this location in RegEdit, you will notice something interesting: 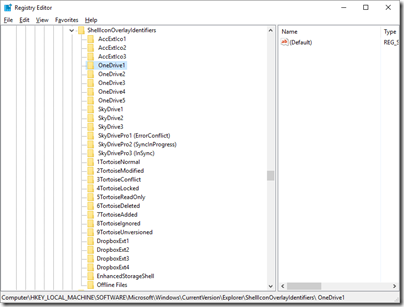 Some of these entries, including AccExtIco (Adobe Creative Cloud), OneDrive (personal OneDrive) and SkyDrivePro (OneDrive for Business), have a leading space in their name. Why? That is because the authors of these applications want THEIR stuff to work right, so by including the leading space they get to the top of the queue.

(I also have entries for SkyDrive as well as OneDrive, registry bloat caused by the name change no doubt).

Microsoft’s support article on the subject therefore suggests renaming these entries to have TWO leading spaces:

You can see where this is going to end … Adobe will install its entries with three spaces, Microsoft will come back with four, and so on. Possibly.

It is also an imperfect solution. On a machine suffering from this issue I performed an Office repair, which restored the old entries with a single leading space while not removing those with two leading spaces. More bloat.

If you get this problem, the best solution is to remove applications so that there is no conflict. If you want to use Mozy for backup, Dropbox because it works, and two OneDrives because they are nearly free, well, you are not going to have all your icon overlays working and that is that.

4 thoughts on “The battle to own Windows Explorer shell overlay icons, or why your OneDrive green ticks have stopped working”