This is an exciting development, evolving the mobile-centric Xamarin Studio IDE into a true mobile-first, cloud-first development tool for .NET and C#, and bringing the Visual Studio development experience to the Mac.

I tend to agree that it is a significant piece of news. It signals Microsoft’s intent to offer first-class support for Mac developers. Other than at Microsoft events, the majority of the developers I see at conferences carry Macs rather than Windows laptops, and if the company is to have any hope of winning them over to its cross-platform ASP.NET web application framework, getting excellent development support on Macs is a critical step.

Naming things is not Microsoft’s greatest strength though. Sometimes it gives different things the same name, such as with OneDrive and OneDrive for Business, or Outlook for Windows and Outlook for iOS and Android. It makes sense from a marketing perspective, but it is also confusing.

This is another example. No, Microsoft has not ported Visual Studio to the Mac. This is a rebrand of Xamarin Studio, originally a cross-platform IDE for its C# mobile app framework, but more recently Mac-only.

Hutchinson makes the best of it:

Its UX is inspired by Visual Studio, yet designed to look and feel like a native citizen of macOS …. Below the surface, Visual Studio for Mac also has a lot in common with its siblings in the Visual Studio family. Its IntelliSense and refactoring use the Roslyn Compiler Platform; its project system and build engine use MSBuild; and its source editor supports TextMate bundles. It uses the same debugger engines for Xamarin and .NET Core apps, and the same designers for Xamarin.iOS and Xamarin.Android.

The common use of MSBuild is a key point. “Although it’s a new product and doesn’t support all of the Visual Studio project types, for those it does have in common it uses the same MSBuild solution and project format. If you have team members on macOS and Windows, or switch between the two OSes yourself, you can seamlessly share your projects across platforms,” says Hutchinson. 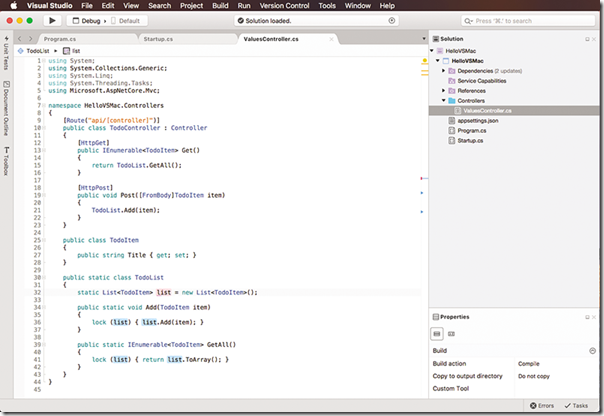 The origins of what will now be Visual Studio for the Mac actually go back to the early days of the .NET Framework. Developer Mike Kruger decided to write an IDE in C# in order to work more easily with a pre-release of .NET Framework 1.0. His IDE was called SharpDevelop. Here is an early version, from 2001: 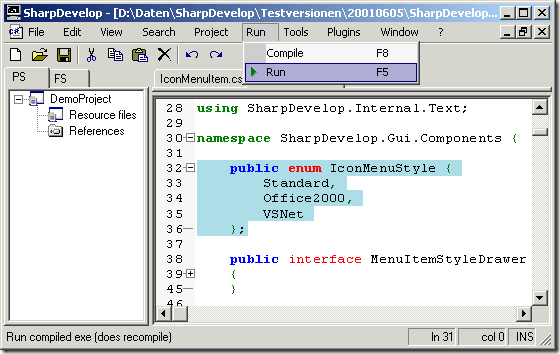 Of course by then most developers used Visual Studio to work with C#, but there were several reasons why SharpDevelop continued to have a following. Unlike Visual Studio, it was built in C# and you could get all the code. It was free. It was also of interest to Mono users, Mono being the open source implementation of the .NET Framework originated by Miguel de Icaza (also now at Microsoft). In 2003, Mono developers started work on porting SharpDevelop to run on Linux using the GNOME toolkit (Gtk#). This forked project became MonoDevelop.

Xamarin (the framework) of course has its roots in Mono and when Xamarin (the company) decided to create its own IDE it based it on MonoDevelop. So MonoDevelop evolved into Xamarin Studio.

So now some sort of circle is complete and what began as SharpDevelop, a rebel imitation of Visual Studio, will now be an official Microsoft product called Visual Studio for the Mac – though how much SharpDevelop code remains (if any) is another matter.

Historical digression aside, the differences between Visual Studio and Visual Studio for the Mac are not the only point of confusion. There is also Visual Studio Code, an editor with some IDE features, which is cross-platform on Windows, Mac and Linux. This one is based on the Google-sponsored Chromium project and has won quite a few friends.

Should Mac users now use Visual Studio Code, or Visual Studio for the Mac, for their .NET Core or ASP.NET Core development? Microsoft will say “your choice” but it is a good question. The key here is which project will now get more attention from both Microsoft and other open source contributors.

Still, we should not complain. Two rival Microsoft IDEs for the Mac are a considerable advance on none, which was the answer until Visual Studio Code went into preview in April 2015.