Zend, a company which specialises in PHP frameworks and tools, has released the results of a developer survey from November 2011.

The survey attracted 3,335 respondents drawn, it says, from “enterprise, SMB and independent developers worldwide.” I have a quibble with this, since I believe the survey should state that these were PHP developers. Why? Because I have an email from November which asked me to participate and said:

Zend is taking the pulse of PHP developers. What’s hot and what matters most in your view of PHP?

There is a difference between “developers” and “PHP developers”, and much though I love PHP the survey should make this clear. Nevertheless, If you participated, but mainly use Java or some other language, your input is still included. Later the survey states that “more than 50% of enterprise developers and more than 65% of SMB developers surveyed report spending more than half of their time working in PHP.” But if they are already identified as PHP developers, that is not a valuable statistic.

Caveat aside, the results make good reading. Some highlights:

Those are huge figures, and demonstrate how far in the past was the era when mobile was some little niche compared to mainstream development. It is the mainstream now – though you would get a less mobile-oriented picture if you surveyed enterprise developers alone. Similar thoughts apply to social media and cloud deployment.

The next figures that caught my eye relate to cloud deployment specifically.

The main message here is: look how much business Amazon is getting, and how little is going to giants like Microsoft, IBM and Google. Then again, these are PHP developers, in which light 6% for Microsoft Azure is not bad – or are these PHP developer who also work in .NET?

Finally, the really important stuff. 86% of developers listen to music while coding, and the most popular artists are:

Zend has announced Zend Studio 9 beta, the latest version of its IDE for PHP. The feature that caught my eye is integrated support for the Zend Developer Cloud, currently in technical preview. Setting up a PHP development environment is not too difficult, but can be a hassle to maintain, and the idea of being able to fire up an IDE anywhere and start coding is attractive.

You do not need Zend Studio to use the Developer Cloud; they are independent projects, and you can use the free Eclipse PHP Development Tools (PDT) or another IDE or editor.

The PHP Developer Cloud is not just a shared hosting environment for PHP applications:

All applications are housed within a container on the Zend Application Fabric. This container is separate from all other containers and has its own database instance and is easily connected to your IDE.

The Zend Application Fabric is for deployment as well as development. It is a server framework that includes the Zend Framework and also the capability of scaling on demand.

Once you have developed your app, you can deploy to any cloud provider that supports the Zend Application Fabric, including Amazon Web Services, IBM SmartCloud,  a private “custom cloud”, or a resilient multiple cloud option which Zend calls RightScale. You can deploy to RightScale using both Amazon and Rackspace together, which I presume means your app will keep on going even if one of these providers were to fail.

Details on the site are sketchy, but if Zend has got this right it ticks a lot of boxes for enterprise PHP developers. 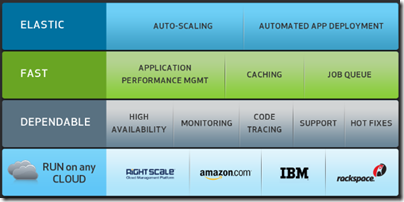 I’m at Yahoo! Hack day in London – not hacking, but here for sessions on topics such as YUI (Yahoo! User Interface Library) and PHP.

I had a brief chat with Rasmus Lerdorf who is speaking later. I asked him about Zend, which presents itself as the PHP company (that is actually the slogan on its web site). Is it really?

Lerdorf says Zend has no special status. While acknowledging its contribution, he says there are 1300 PHP committers, and only 6 work for Zend. He emphasises that PHP is a community project and that decisions are made by consensus, influenced by who is actually willing to write the code, not by Zend or any company.

I also asked about PDT (PHP Development Tools), the Eclipse-based open source IDE. Lerdorf says there are lots of PHP IDEs, and people who use generic editors for PHP, and none has any more status than any other; he doesn’t use PDT.

From my perspective as press, there are only two organizations who ever encourage me to write about PHP. One is Zend; the other is Microsoft, keen to establish Windows as a credible PHP platform (Lerdorf says PHP on Windows has made enormous progress in the last couple of years). Zend does seem to do more than any other company to promote PHP for commercial and corporate development.

Lerdorf is not surprised. We’re developers, he says, we don’t do PR.

Zend’s effort is broadly beneficial to the PHP community – provided that it does not give a false impression of who owns PHP.