Microsoft’s Small Business Server 2008 is supported running as a Hyper-V guest; but there’s one nasty problem. The built-in backup expects external USB drives, and a Hyper-V guest does not have direct access to USB.

Here’s a solution I’ve come up with. It lets you use the built-in backup wizard, and lets users simply attach a new external USB drive each day as they expect. It is not perfect, since it requires copying the entire backup afresh to the USB drive, rather than doing a differential backup – though SBS itself still does a differential backup. It also requires Hyper-V 2008 R2, which means struggling with server core if you use the free version. Still, it’s better than any solution I’ve seen from Microsoft.

Today I attended Cloudforce in London: essentially the Salesforce.com Dreamforce conference on tour. The platform marches on: CEO Marc Benioff says the company is growing at 20% per year, and in general the customers I spoke too seem pleased with their choice. Benioff was as usual full of jabs at the “old stuff” – things like Siebel, Microsoft Office, anything that is not Cloud – but made so many jibes aimed at SharePoint that I began to think he has some respect for Microsoft’s document collaboration platform.

The major theme of the conference was Chatter, which is being rolled out to Salesforce.com users next year. Chatter takes key features from Twitter, including status updates and followers, and integrates them with the platform. There is also a Facebook-like profile page for all users. We saw several possible applications for the feature:

There is a security mechanism, whereby alerts can be restricted to certain people or groups. You can also filter alerts to reduce noise.

We also saw a desktop client built with Adobe AIR, for monitoring status feeds in the same style as familiar Twitter clients.

While I don’t question the potential of Chatter, the current craze for Twitterising everything reminds me of the hype around RSS a few years back, which which it has many parallel. In the end it is another way to communicate, with better contextualisation than email and less vulnerability to spam.

Twitter itself has little chance of penetrating the Enterprise, when it is so easy to re-implement its essential features.

There was not much developer content here, sadly, though we did see a “30 minute Cloudforce application” in one of the sessions. It was all wizard-drive data form design, and strongly reminiscent of what we used to with the likes of Access and FileMaker, but all browser-hosted. One difference though is that the Salesforce platform has built-in workflow and approval. Another advantage is that you are in effect extending an application that already knows about your organisation’s users and contacts. The result is that working applications can be put together quickly, provided that they fit nicely with the platform model.

I’ve been writing a retrospective on Microsoft and noticed an intriguing pattern.

When Microsoft was fighting the browser wars, it first of all developed its own web browser, and then added COM (ActiveX).

When Microsoft was countering Sun’s Java, it came up with its own implementation, Visual J++. Key differentiator: COM integration.

When Microsoft was responding to Adobe Flash, it came up with its own implementation, Silverlight, and then – you guessed.

The reason is that COM is the gateway to everything Windows; but it is a frustrating habit for those who want to live in a cross-platform world.

The number of shelves dedicated to non-iPod music players in the average electronics retailer seems to shrink with each passing year, and as I write the top 10 bestselling MP3 players at Amazon.co.uk are all iPods, so it’s good to note that Apple alternatives still exist. As it happens, I’d been using an iPod Nano for a few weeks when Sansa’s latest Clip+ turned up for review; and it makes an interesting comparison. 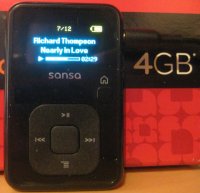 Feature-wise, the Sansa falls somewhere between a Nano and a Shuffle. There’s no camera, games or accelerometer on a Sansa Clip, and at 4GB it has half the storage of the least capacious Nano (though see below); but unlike a Shuffle the Clip has a screen, an FM radio, and a voice recorder.

Sansa’s device also has something all the iPods lack: a slot for a Micro SD or SDHC card, which means you can plug in extra capacity up to 16GB.  This port also supports a concept called slotRadio, where you purchase 1000 pre-selected songs on a card, but they are locked to that card. A slotRadio card costs $39.99 in the USA; as far as I can tell they are not available yet in the UK.

In use, the Sansa Clip+ offers none of the tactile pleasure of an iPod; but check out the price. This particular model is £34.99 at Amazon.co.uk; a new-generation Nano is over £100 and even a 4GB Shuffle is over £55.00.

The good news is that the Clip+ sounds very good. That’s just as well, since I doubt many will care about slotRadio (especially in the UK). Expandable storage is a nice feature, though I’d more likely stick in 4GB and forget about it, rather than trying to manage a set of tiny SD cards.

Another strong feature of the Clip+ is that it plays FLAC and Ogg Vorbis as well as MP3, though I’d have liked to see MP4 in there too, for DRM-free purchases from iTunes. I also like being able to attach the Clip+ to a PC via USB and simply copy songs to it, rather than having to use Apple’s bloated iTunes.

Still, I have to admit that the controls are rather fiddly and annoying; I kept clicking back when I needed to click the centre button and sometimes vice versa.

In the end, there are two reasons to get a Clip+. One is because you like having an Apple-free musical life. The other is because you value function over form. The Clip+ does a great job at a lower price than an iPod; but if you like the silky feel and stylish appearance of Apple’s toys, this alternative is not going to win you over.

Shares in Rightmove, a UK web site for house sales, have dropped  by move then 10% over the last couple of days, following a report by the Financial Times that “Google is in talks with British estate agents to launch an online property portal.”

I do not know what chances of success this venture has. Google does not instantly dominate any market into which it moves; the combination of Google Checkout and Google Shopping hasn’t killed off PayPal/eBay or Amazon as yet.

What interests me though is the impact of the rumour. It is not  only Google’s size and profitability; it is the fact that Google is for many (most?) people the portal to the Web, giving it huge power to reach any Web-based market.

The restraining factor is that it is difficult for Google to exploit that power without falling foul of legislation that protects free markets. When I search for a product on Google, I don’t see any evidence that it favours its own shopping site, for example; though having said that I am only one click away from the Shopping link at the top of the page that searches only Google’s site.

Still, drawing the line between what is and is not reasonable is hard to do. For example, what if Google had a “search for houses on sale here” link in Google Maps?

If Android and later Chrome OS succeed, Google may become the portal to more than just the Web. Its services will have geo-location data as well. Its data-gathering algorithms might learn our shopping and eating out preferences and guide us with uncanny prescience towards things that we enjoy.

I am not surprised that Google rumours have the power to move markets.

I’ve been working with Small Business Server 2008 recently and one of the tasks was to import an existing shared folder into SharePoint.

You would have thought that would be trivial, but it turns out it is not quite so. The normal suggestion is to open a SharePoint library in Explorer and do the import there. That’s actually not ideal. One problem is that, at least in our case, it does not work on the server though it does work on workstations. I suspect this is some arcane permission problem or feature; but doing this over the network is inefficient. Another issue is that Explorer is not smart about things like setting the date to that of the original, which can be annoying. A third problem is that some characters are allowed in document names on the file system, but not in SharePoint – such as  & { } and %. If your Explorer copy hits one of these the copy will fail.

I looked for a script-based solution, initially using PowerShell, but came across SPIEFolder instead. This is a simple C# application. Once I’d figured out that you have to run it from an elevated command prompt, it worked fine. However, it only imports into the top level of a SharePoint library. I added a target subfolder argument to SPIEFolder, and some name mangling to deal with illegal characters, and now it does what I want. I’ve not changed the default file date behaviour yet; but I think I can see how do do this if necessary: see http://msdn.microsoft.com/en-us/library/ms439259.aspx for the code.

I was interested to read that Google is abandoning Gears in favour of HTML 5.

While that makes sense, it is a hassle for developers who have developed for Gears, since there are differences between features such as HTML 5 local storage and Gears LocalServer. The Gears API was tidy and effective so in some ways I’m sorry to see it go, though a broad standard will be much more useful.

Still, this does mean that you can develop to the HTML 5 standard for Offline Web Applications with some hope that, although broad implementation is lacking now, it will come in future. Even IE 9 is likely to have a fair amount of HTML 5 in it.

It is a critical standard because the success of something like Google’s Chrome OS will depend on it. Nobody can count on being always connected.

In the meantime, there are also offline features in Adobe Flash and Microsoft Silverlight.