Adobe has announced Acrobat X (pronounced Acrobat ten), the latest PDF document creator with its associated free reader, which will be available in November.

The Acrobat product is a bit of a chameleon. The PDF format – now an ISO standard – has three distinct roles.

The first and original role is as a means of distributing electronic documents that look the same everywhere. This has never been a goal of HTML, which was designed to give the browser, or “user agent”, flexibility over how to render documents. Word processor formats are also compromised in this respect, because they are for editing, whereas PDF is for output. This is how most users encounter PDFs – a document format which is somewhat annoying, especially when it opens to a full page view and you cannot read a thing, but which does show each page as originally designed.

The second role is for print professionals. This is a logical extension of the first role: the same characteristics make it ideal as a format for delivery to a printer. If terms like Preflight, Calibrated CMYK, Trap presets and Job Definition Format mean anything to you, this may be how you use PDF.

The third role is as the forms client in Adobe enterprise workflow systems. When I attended Adobe’s Partner Conference in Amsterdam, this usage was the area of focus. I saw case studies such as processing applications for planning permission, invoicing, and health insurance applications.

Is there any conflict between these roles? I believe there is, though Adobe will disagree. There are features in Acrobat and Adobe reader which exist to support its role in enterprise systems, but do not matter to the more common use of PDF, for distributing static documents. In particular, the ability to execute script and host Flash applications has value if you think of PDF as an application client, but if you just want to read a document it adds bloat and security risk.

Still, we should not complain too much. PDF is both useful and, for most of us, free – particularly now that PDF export is a standard feature in Microsoft Office and in many Mac applications.

After that preamble, what is new in Acrobat X? I’ve been trying a late pre-release, and from what I have seen the changes are more in the realm of the user interface, usability and security, than in new capabilities, though I would still describe this as a major update. Here are the highlights.

First, Adobe has responded to PDF security issues by introducing a new protected mode on Windows, which according to Adobe is the only platform where significant malware attacks via PDF occur. All write calls are sandboxed by default, making it hard for malware to infect a PC. Apparently this is just the first phase, and a future version will restrict read calls as well. Another weakness in the current sandbox is that it does not protect the Windows clipboard.

Second, Adobe has polished and simplified the user interface. In a web browser, a PDF appears without any additional controls or toolbars other than a small toolbar that appears if you hover the mouse around the bottom centre of the page.

Adobe’s intent is to make moving from HTML to PDF so seamless you hardly notice, further embedding the format into the web.

Acrobat’s user interface has also been revamped. There are a few basic commands on the traditional menu and toolbars, but most of the features are accessed through a tabbed right-hand column, with tabs for Tools, Comments and Share. It is similar to the old Office task pane. I think it is successful, making features easier to find and use.

One of the sections in the Tools pane is called Action Wizard, which is a new macro feature in Acrobat Pro. “Macro” is not quite right; it is more of a wizard authoring tool, with some pre-prepared wizards that you can use as-is or modify. The following illustration shows one of these wizards in edit mode. 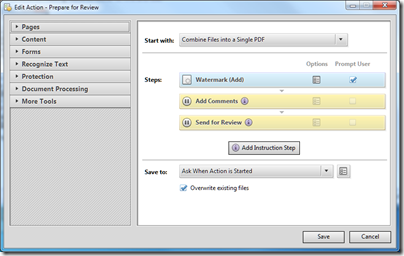 The Action Wizard should both speed up repetitive tasks, and ensure that important steps are not omitted. The focus is on preparing documents, for example for review, distribution, or web publishing.

Third, Adobe is having another go at the portfolio feature, introduced in Acrobat 9 but perhaps not used as much as the company had hoped. Portfolios let you combine multiple documents into one, for single file distribution with some added features in the container. If you are nostalgic for the Microsoft Office Binder, you will like Portfolios.

Acrobat X makes portfolios easier to create, and adds features like layouts and visual themes, so you can achieve slick effects with little effort. Organisations might create their own themes so as to promote their brand. 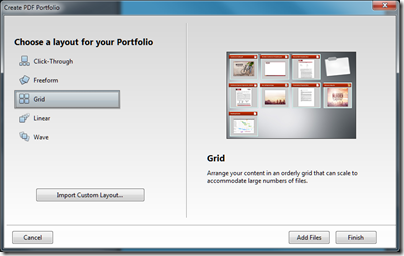 It is cool stuff, but if the portfolio feature in Acrobat 9 found little use, I am not sure that this new improved version will make much difference. Maybe the need for gathering multiple documents into one is not as great as Adobe imagines.

Other features include Microsoft SharePoint integration, enhanced OCR (optical character recognition), and improved copy and paste from PDF to editable documents such as Word and Excel, while preserving formatting – this last quite an important feature since this is a common source of frustration.

I am not sure about portfolios, and have some concern that Adobe has pushed too many features into Acrobat. Nevertheless, I found myself liking the new Acrobat. The usability effort has paid off, and I found it more enjoyable to use than previous versions. Performance seems better as well. Taken together with security improvements on Windows, this is a welcome upgrade.

LiveCycle is a suite of applications which I think of as two things combined. On the one hand, it forms a server platform for business process or workflow applications based on Adobe PDF forms and documents. On the other hand, it provides data services for Rich Internet Applications, usually but not necessarily to client applications on the Flash runtime, either in or out of the browser. It is a little confusing, but these two aspects are essentially the old Adobe Enterprise platform merged with Macromedia’s work in support of Flash, combined into one suite after Adobe’s takeover of Macromedia in 2005.

The usual arguments in favour of hosted services apply and this is a smart move from Adobe. Still, customers are currently forced to use Amazon for the actual virtual servers, even though others such as Rackspace Cloud Servers are substantially cheaper than Amazon EC2. Is that a problem? According to Adobe’s John Carione, senior enterprise product marketing manager at Adobe, “when we were evaluating vendors, we think that one of the areas Amazon excels in is around security.” I noticed that the security topic also occupies around one-third of this introductory video, suggesting that this remains a significant barrier to adoption for many potential customers.

So how will managed LiveCycle work? “We’re providing a fully managed service, and part of that is going to be delivered with what we’re calling  the Adobe Network Operations Center … which is going to provide 24×7 monitoring of the applications, backup and recovery, upgrades. They’ll be one contact at Adobe to talk to about everything,” says Carione. Apparently the Network Operations Center is based on a piece aquired with Omniture last year. Ominiture was a web analytics business which was based on hosted applications and services; maybe that was an important factor driving the acquisition.

When I asked Carione about ease of scaling, I got a slightly defensive answer. “This is a v1, we have the opportunity for customers to buy additional instances. In the future we’ll have more of that dynamic scaling.” Another issue is integrating with on-premise resources such as databases and directory services, which Carione says is a matter for business integrators; in other words, a significant challenge. And what if Amazon goes down? Carione did not answer directly, but said that 99.5% uptime is guaranteed.