The unstated theme of Adobe MAX 2011 last week was this: what is the future of Flash? The issue being that with HTML 5 ascendant and Apple wrecking the idea of Flash as an ubiquitous web plug-in, should Adobe be frantically retooling its design tools for HTML and apps, or does Flash still have a future? 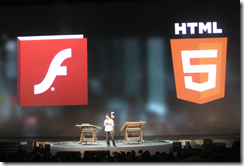 The answer is a little of both; but let’s be clear: there was more Flash than HTML at MAX. What was the most eye-catching demo? It was Flash running Unreal Tournament with the claim of better graphical performance than on Microsoft Xbox 360 or Sony Playstation 3.

It is also worth noting that the touch apps demonstrated at the day one keynote were created in Flash and compiled into apps using the new Captive Runtime feature in AIR 3.

At the same time there was a substantial amount of HTML effort on show. There was the announced acquisition of Nitobi, makers of PhoneGap – though note that PhoneGap itself is heading to the Apache Foundation – and demos of the Edge motion and interaction tool for HTML5. Adobe also told us about its work on CSS Regions and CSS  Shaders. I also saw how HTML export, including partial ActionScript to JavaScript conversion, is coming in a future version of Flash Professional.

My perception is that while Adobe is serious about stepping up a gear with its HTML tools, its heart is still with Flash. That said, there is a shift of emphasis away from Flash as a web plug-in, other than when it is the “Games console of the Web”, and towards Flash and Flex as a cross-platform development platform. Adobe is using Flash and AIR for its own Touch apps, previewed at MAX.

Let me add that the new features in AIR are huge, in particular the ability to package the Flash runtime as part of your app, called Captive Runtime, and the ability to extend your AIR app with native code. Cross-platform mobile tools are a particular interest of mine, and Adobe’s offering is strong in this field, though it will never be the most efficient. Adobe is also pressing ahead with something like web workers for ActionScript, providing a form of concurrency, though this is not in AIR 3 but planned for a future release. Another big new feature in the Flash runtime is Stage 3D, accelerated 3D graphics which enabled the Unreal demo mentioned above.

Nitobi’s Andre Charland was at MAX and I could not shake off the thought that he will find joining the Flash company difficult. 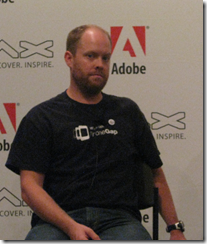 It will be near-impossible for Adobe to be equally enthusiastic about both PhoneGap and AIR, and given that Flash and AIR are so deeply woven into the company’s products I suggest that PhoneGap is more likely to be neglected.

Take a look at Adobe’s agenda for the Back from MAX event in London next month. It is 100% Flash and Flex.

What about the MAX attendees? I have contradictory evidence here. I noticed that a session on Building mobile apps with HTML, CSS and JavaScript (ie PhoneGap) was packed out, while the session running at the same time on What’s new in AIR – and what’s next was sparsely attended. This session was repeated, which means Adobe thought it would be a popular one. I was also surprised by how few went along to hear about Flash Professional Sneak Peek: a glimpse at the future which was a fascinating session if you are interested in the future of this tool. Adobe must have been surprised too, as it was in a large room. 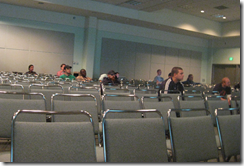 That said, a session on native extensions for AIR was moved from one of the smallest rooms to one of the biggest and was still full. There was also great interest in concurrency in the Flash runtime. Many of the attendees I spoke to saw themselves as Flash and Flex developers and there was more talk about how to fight off the perception that the tech world is moving to HTML, than of how to encourage it.

Getting rid of Flash may seem like obvious progress to someone annoyed by the Adobe updater, or who is an Apple iOS enthusiast, or who does not like the idea of proprietary plugins. It does not feel like that though if you have a browser-hosted app to maintain and enjoy targeting a single runtime rather than testing in every browser, as well as using features of Flash that are hard to replicate in HTML.

Adobe’s design and development platform is still Flash-centric, which is either good or bad news depending on your perspective.

See also Down but not out: Flash in an HTML5 world.

Adobe has announced the acquisition of Nitobi, the company which created and sponsors the open source PhoneGap project for creating cross-platform mobile applications using HTML5 technology.

Apparently this does not affect the plan to donate PhoneGap to the Apache Software Foundation:

We are also excited to announce our donation of the PhoneGap code to the Apache Software Foundation,” said Dave Johnson, chief technology officer, Nitobi. “Adobe has been fully supportive of our decision.

Adobe already offers PhoneGap integration in Dreamweaver 5.5, though I found some gaps in this initial release.

I spoke to Nitobi CEO André Charland earlier this year.

Here at Adobe’s MAX conference in Los Angeles I will be quizzing Adobe about how it plans to evolve its design and development tools to better support PhoneGap.

Last week was all conferences – Adobe MAX 2010 followed by Microsoft PDC – which left me with plenty of input but too little time to write it up. It is not too late though; and one advantage of attending these two events back-to-back was to highlight the tale of two runtimes, Adobe Flash and Microsoft Silverlight. MAX was a good event for Flash, and PDC a bad one for Silverlight, though the tale has a long way yet to run.

The key difference at this point is not technical, but all about partners. At MAX we saw how the Flash runtime is integral to the Blackberry PlayBook, with RIM founder Mike Lazaridis coming on stage to tell us so. Flash is also built into Google TV, and Andres Ferrate and Daniels Lee from Google Developer Relations presented a session on creating web apps for the platform – worth watching as it brings out the difference between developing for a TV “lean back” environment and traditional mouse or touch user interfaces -  and we also heard from Samsung about its Flash-enabled TVs coming in 2011. In each case, it is not just Flash but AIR, for applications that run outside the browser, which is supported. Google TV runs Android; and AIR for Android in general drew attention at MAX, encouraged by free Motorola Droid 2 smartphones handed out to attendees.

If the task was to convince Flash developers – and those on the fence – that the platform has a future, MAX delivered in spades; and Adobe can only benefit from the uncertainty surrounding the most obvious runtime rivals to Flash, Java and Silverlight.

But what about that other platform, HTML? Well, Adobe made a bit of noise about projects like EDGE, which exports animations and transitions to SVG and JavaScript using an extended JQuery library, as well as showing a “sneak peek” of a tool to export a Flash animation (but not application) to  HTML. Outside the Adobe fan club there is still considerable aversion to Flash, stoked by Apple; in one of the sessions at MAX we were told that Steve Jobs’ open memo Thoughts on Flash has done real damage.

My impression though is that Adobe still has a Flash-first philosophy. The Solution Accelerators announced for LiveCycle 2.5, for example, all seem to be based on Flash clients, which could prove difficult if Apple’s iPad continues to take off in the enterprise. Adobe could do more to provide JavaScript libraries for LiveCycle clients, and tools for creating HTML applications. If you came to MAX looking for evidence that Adobe is moving towards web standard HTML clients, you would have been largely disappointed; though seeing JQuery guy John Resig in the day two keynote would give you some comfort.

Some other MAX highlights:

Disappointments? I was sorry to hear that Adobe is closing down contributions and reducing transparency in the open source Flex SDK, though it is said to be temporary. It also seems that plans to enhance ActionScript are not well advanced; Silverlight remains well ahead in this respect with its C# and .NET support.

What about Adobe’s enterprise ambitions? Klint Finley’s post on the Adobe Stack and what it means for Enterprise Development is a good read. The pieces are almost in place, but the focus on document processing at the back end, and Flash and Acrobat on the front end, makes this a specialist rather than a generic application platform.

Overall though it was a strong MAX. I appreciate Adobe for not being Google or Apple or Microsoft or IBM, and hope that takeover rumours remain as rumours.