A recent annoyance was a blue screen when I was in the middle of typing a Word document. “Memory management” it said.

You might think faulty RAM, but I did not think so as I had tested it extensively with the excellent Memtest86. So what was causing it? And no, I do not regard Windows as an unstable operating system, not any more (not really since Windows 98 days).

I started troubleshooting. The first step is to install the Debugging Tools for Windows, if you have not already, run Windbg, and load the minidump which Windows usually creates when it crashes. Minidumps are saved in the /Windows/Minidump folder.

It said VISTA_DRIVER_FAULT and identified the SearchProtocol process, but I was not convinced that this process was really to blame. My reasoning is that it is a Microsoft process that is running on most Windows boxes so unlikely to be badly broken.

I decided to look for a faulty driver. You can do this by running the Driver Verifier Manager, summoned by running verifier.exe (this lives in /Windows/System32 but you can start it from anywhere).

This application enables a debugging mode in Windows that will scrutinise the drivers you specify for errors. This slows down Windows so it is not something you want to leave enabled, but it is great for finding problems.

I elected to check all drivers and continued. Reboot, and as expected, an immediate blue screen.

While Driver Verifier is enabled and causing a crash you can only boot into safe mode. However Windbg works OK in safe mode. I took a look at the new minidump. The process name this time was services.exe. That means any of the services could be at fault, so not all that illuminating.

I ran msconfig and disabled all non-Microsoft services. Restarted and verifier was happy. Now it was a matter of “hunt the service”.

Eventually I discovered through trial and error and hunch (it had to be a service which I had recently installed or updated) which service failed to verify. The guilty party: Intel Desktop Utilities. This application monitors sensors on an Intel motherboard for temperature and fan speed, and fires alerts if the readings go outside safe limits.

I uninstalled the desktop utilities. No more blue screens since.

I find it hard to believe that an Intel utility distributed with all its motherboards is causing Windows blue screens; on the other hand in my case it seems clear cut. And yes, I did have the latest version 3.2.0.038b “for Intel Desktop Boards with 5 or 6 Series chipsets.” My board is the DH67CL. I would be interested to know if others with same version can successfully boot with Driver Verifier enabled.

This is what happens when Windows 8 crashes: 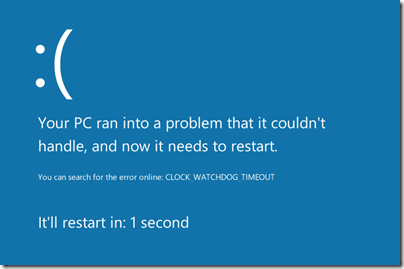 The restart message proved false, and I had to reset the virtual machine.

I did the search, which told me:

The CLOCK_WATCHDOG_TIMEOUT bug check has a value of 0x00000101. This indicates that an expected clock interrupt on a secondary processor, in a multi-processor system, was not received within the allocated interval.

This proves that you make give blue screens a prettier face, but that does not make the error messages any more helpful to a non-expert user. Or should I head for my nearest computer store and ask if they have a spare clock interrupt?