A couple of months ago Embarcadero’s John Ray Thomas published a roadmap for the company’s C++ tools. Coming soon: not only a long-awaited 64-bit compiler for Windows, but also native iOS and Android support. On top of that, there are plans for “the very best in C++11 and C99 language and library compliance in the industry.”

Sounds good; but this forthcoming upgrade is not quite what it seems. I spoke to technical evangelist David Intersimone about the changes. The company is adopting Clang, an open source project which creates a C/C++/Objective C front-end for the LLVM compiler. “We’re integrating all that into our IDE,” said Intersimone. “We’re also going to be using that same toolchain world with our Delphi compiler as well.”

“We have analysed what to do about C++. Our compilers both for Delphi and C++ have been around for a lot of years, and over time it just got harder and harder to add new capabilities to make programming simpler and also to add power and richness to the languages. In C++ in particular the language continues to be updated, with now C++ 11. So we made the decision to use Clang and LLVM on the C++ side, for the 64-bit compiler. We’re going to keep our existing compiler for 32-bit Windows for now, and then eventually replace that.

“For Delphi we’re still using our existing compiler to do some of the work, but we’ve been working on a next-generation compiler for Delphi and that is still in the works. For a while we’ll have two compilers, the existing architecture compilers, and then new compilers.”

Embarcadero has its own C++ extensions to support component development, and is working on adding them to Clang. “We’re leveraging and extending the Clang compiler with the property-method-event extensions that we added to our own C++ compiler.”

It is a sad moment in some ways, bearing in mind the long history of what was once the Borland C++ compiler. Equally, it is a sensible move. Intersimone said that the work of keeping up with the evolving C++ specification was disproportionate to the benefits. “It’s a monster language, with a lot of power and a lot of complexity. It made perfect sense to fit our extensions [to Clang] versus building a compiler from scratch and having to continue to track the language into the future.”

Embarcadero can focus instead on its IDE and tools, and on the frameworks for Windows and for cross-platform.

Look out for a more detailed interview with David Intersimone in a future article for Hardcopy. 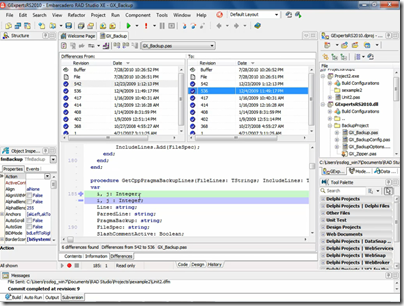 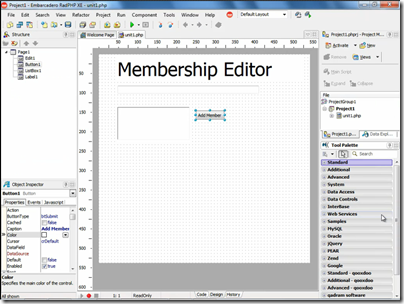 Embarcadero has published an updated roadmap for its Delphi development tools: Delphi, C++Builder and the RAD Studio shared IDE. These tools combine the Object Pascal (Delphi) or C++ language with a visual component library and native code compiler for Windows.

Chief Technical Architect Michael Rozlog outlines four products which are being worked on, including “Fulcrum”, “Wheelhouse”, “Commodore” and “Chromium”. He says work is being undertaken on all of these, so the exact release schedule is not specified. Embarcadero has an annual release cycle for these products so you might reasonably project that Fulcrum is set for release later this year, Wheelhouse for 2011, and Commodore for 2012. Delphi 2010 came out in August 2009.

Delphi “Fulcrum” introduces a cross-compiler for Mac OS X, with the emphasis on client applications. The IDE will run only on WIndows. Rozlog also talks about integration with Microsoft Azure so that Embarcadero can tick the Cloud Computing box.

Delphi “Wheelhouse” adds Linux support, on a similar basis where the IDE runs only on Windows. It also adds a focus on server applications for both Linux and Mac OS X, including support for Apache modules.

Delphi “Commodore” is the 64-bit release, with 64-bit and easier multi-core development on all three platforms. Rozlog also tosses in “Social Networking integration” and “Better documentation”.

2012 is a long time to wait for 64-bit, particularly as the Windows server world is now primarily 64-bit. Embarcadero is promising a 64-bit compiler preview for the first half of 2011, though this will be command-line only.

Delphi “Chromium” is a revamp of the Visual Component Library with a new look and feel and “natural input integration” – location, voice, video motion.

In addition, Rozlog talks about updates for Delphi Prism, which is loosely the Delphi language plus a .NET compiler, and integrates into Visual Studio. Prism 2011 will work with Visual Studio 2010, and includes support for Mono. This extends to working “with MonoTouch to create Apple iPhone ready applications.” Rozlog doesn’t state whether this has been cleared with Apple’s Steve Jobs, who is opposed to use of languages other than Objective C for iPhone or iPad development.

Is Embarcadero doing enough to keep Delphi current? I’m not sure. Delphi is a fantastic RAD and native code compiler for Windows; in the past it suffered when Borland tried to extend it beyond that, to Linux and .NET, distracting development effort from its core role. The risk here is that the Mac and Linux effort may be more of the same. Of course this will be nice to have, though running the IDE on Windows and compiling for Mac is a limitation that means it will not appeal to Mac developers, only to Delphi Windows developers hoping to extend their market. But there are other ways to do cross-platform now –  Silverlight, Flash, web applications – and I wonder if the time for this has passed.

A compiler for iPhone and iPad would now be bigger news, especially since Silverlight and Flash are not available on these platforms, but for this Embarcadero would need to overcome Apple’s cross-compiler restrictions as well as solve the technical problems.

Windows 7 has breathed some new life into Windows client development. I hope Embarcadero is not neglecting areas like great RAD support for features like Jump Lists and thumbnail previews, for the sake of the uncertain cross-compiler market.

There is a discussion of the new Roadmap in the Delphi forums here, and Marco Cantu also comments.