Someone asked me what is the best programming language for a child to learn after starting (and having success) with Scratch.

Scratch is a visual programming language which actually runs on Smalltalk, though its users do not need to know this. Scratch 2.0 seems to be written in Adobe Flash so you can create and program projects in a web browser. As far as I can tell though, there is no obvious and natural progression from Scratch to a code-centric programming language.

I guess the first answer is not to move away from Scratch until you need to. You can do a lot with Scratch, as the many shared projects demonstrate.

Still, I agree that it makes sense to learn text-based programming before too long. What is the best one for a child to learn, not necessarily with computer science or a professional career in mind, but just to take the next step and create some cool games and applications?

I find myself leaning towards Microsoft’s C#. The reason is that there is a capable free version and  you can add XNA Game Studio for game development. C# is an excellent language and has some family resemblance to other languages including C, C++, Java and JavaScript, and Visual Studio is a strong IDE that is perhaps more approachable than say Eclipse or Netbeans.

Snags with C# are that Visual Studio only runs on Windows, the language is proprietary to Microsoft (though Mono is free and open source) and it is not ideal if you want to run on the Mac, or Google Android or Apple iPad.

That said, I could also make a case for Java, or JavaScript, or Python.

I would value suggestions though: what would you recommend to a teenager?

I am at the QCon conference in London where I attended a session by Fraser Spiers mysteriously titled The Invisible Computer Lab.

Spiers is the guy who won a certain amount of fame or notoriety by issuing all staff and pupils with Apple iPad devices at the Scottish private school where he teaches computing. 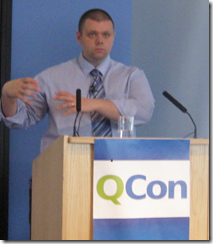 The session blurb did not mention the iPad but said, “this talk will argue for a new direction in school ICT.” I went along because I am conscious that the way computing is taught in UK schools is often ineffective. Problems include kids knowing more than teachers; out of date hardware; too much Microsoft Office; and often an exclusive focus on general purpose applications rather forming any understanding of what computers are and how they work.

There is probably a connection between this and the low interest in computer science in higher level education.

Spiers did mention this; but most of the talk was an iPad love-in. He is an Apple fan and showed us pictures of the original iMac and various Mac notebooks which preceded the arrival of the iPad at his school.

Nevertheless, he made a persuasive case for how the iPad had transformed teaching (not only computing) at the school. According to Spiers, the children write longer essays because they have discovered word processing for the first time; they have new artistic creativity; they use the web far more and the school had to upgrade its internet connectivity; they are escaping from a word-based approach to learning and presenting their work to one which makes use of multiple media types.

He added that some of the expected snags did not materialise. They were concerned about the virtual touch keyboard on the iPad and offered keyboard accessories to everyone; but in practice few wanted it. The kids, he said, now dislike plastic keyboards with their tiresome buttons.

Now, I do make due allowance for the over-exuberance of an Apple evangelist; and that the reality may not be as rose-tinted as he describes it.

Note, however, that Apple is not yet really geared up for iPad in education and Spiers encountered silly issues like the inability to buy site licences for apps delivered over iTunes; each one has to be purchased individually, and they have to fudge the accounts since nobody under 13 can use the app store. I am sure issues like this will be fixed soon.

Objections? Well, there is the cost of Apple’s premium hardware and its tax on the software. There is the ethics of using Apple at all – today, as it happens, there are posts by Bill Thompson and by Tom Arah which do a good job of spelling out concerns about Apple’s authoritarian and increasingly greedy business practices, especially with iOS and the App Store. I would rather be writing up the impact of Linux or Android or open source in education.

However, I will close with my question to Spiers and his answer. What will happen, I asked, when these kids with their experience of iPad computing get jobs and are confronted by offices full of PCs?

“A child that starts this year is going to graduate in 2024,” he replied. “I don’t know what the business environment is going to be like in 2024. I think there will be convergence between iOS and the Mac. I think businesses that stick with the PC infrastructure will not be around in 2024.”