FileMaker Pro is a database manager from FileMaker Inc, a wholly owned subsidiary of Apple. It is a capable produce that has been around for over 20 years and is the dominant Mac-based database manager, though there is also a Windows version. FileMaker has evolved relatively slowly, with more focus on usability than on features. In comparison to Microsoft Access, FileMaker wins on usability and scalability, but Access has a more traditional approach based on SQL and programming with Visual Basic for Applications. FileMaker has a drag-and-drop script editor and support for AppleScript on the Mac.

Although the script editor is frustrating for someone used to writing code, it does work. As well as manipulating the data, you can set and retrieve local and global variables, perform loops and display custom dialogs; it is not as limited as it may seem at first.

A FileMaker database can be huge, with 8 terabytes specified as the theoretical limit. External databases are accessible through ODBC on both Windows and Mac.

The number of users supported by FileMaker is limited. The desktop product supports up to 5 concurrent users, and FileMaker Server up to 250 users. FileMaker has its own built-in security system, though FileMaker server can also authenticate against an external directory. Security is fine-grained, and you can even specify permissions for an individual record.

I have not looked at FileMaker for a few years, but renewed my interest when the company came out with FileMaker Go, a runtime client for Apple iOS. Given that FileMaker runs scripts you might have thought this would be restricted, bearing in mind this provision in the App Store guidelines:

2.7 Apps that download code in any way or form will be rejected

This is normally taken to prohibit runtimes like Java or Adobe Flash/AIR. Well, either someone decided that FileMaker scripts are not code; or there are special rules for an Apple subsidiary, which is reasonable enough. Anyway, FileMaker Go is in the App Store and does run scripts.

What this means is that you can create apps in FileMaker Pro and deploy them to iOS without going via the App Store. There are two models. FileMaker Go can open a file hosted by FileMaker desktop or server, in which case it behaves like a Mac or Windows client, or alternatively you can transfer a file to FileMaker Go to run locally. Transferring a file is easy using iOS launch service; essentially, if you can access the file via the internet or an email attachment, you can just tap it on the device and it will open in FileMaker Go. The advantage of running locally is offline use, whereas the advantage of the client-server model is that all users have the most up-to-date version of the data, and the database can be much larger. FileMaker is a real server application; this is not just file sharing. This also means that FileMaker must be running with the database open if you want to to use the client-server approach.

I tried FileMaker Go with a simple example and it works well. In essence it is delightful; you just open your database either locally or over the network, and it works. Here is a sample app on the iPhone 4: 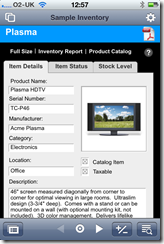 That said, there are things that do not work, spell checking for example. It is also stripped of anything other than client features, so you cannot modify database structure, create new databases, or publish from the device to other clients. You also have to be careful with layout size. Most layouts designed for the desktop will need modification to work well.

There are a couple of issues. One is performance. It is just about bearable, but has that lethargic feel that you get with interpreted code on a relatively slow processor.

Another issue is synchronisation. If you want to work offline, how do you update your main database with any changes? The issue is little different with FileMaker Go than it is with a laptop, and it is discussed here. You have several choices:

2. Treat your local database as read-only.

3. Use import and export. Existing records will simply be overwritten by imported ones.

4. Use a third-party tool. However the tool mentioned here, SyncDek, probably does not work with FileMaker Go since it needs to run a Java process on the client.

5. Roll your own. “FileMaker Pro has all the tools needed to create a robust synchronization system” says the guide; but it is non-trivial to implement this.

I think this is significant for businesses where iOS devices are turning up. Many business apps do resolve down to forms over data, and this is is an easy way to deliver this kind of application to iOS users.

How is FileMaker pro as a programming tool? Just for fun, and because I have done it for other mobile development tools, I built a calculator in FileMaker. I do not recommend FileMaker for general-purpose programming; but it has the essentials, a form designer and scripting. Here is the result on an iPhone 4: 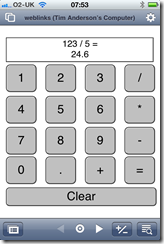 Oddly the biggest struggle I had was finding an easy way to display the input and result. In the end I added a field to the database just for this purpose. If a FileMaker expert could let me know a better way to update a text label on a layout via script, I would be interested to know.

The calculator is slow too, not for the calculation of course, but the operation of the user interface. Still, it does demonstrate that FileMaker Go is indeed able to download code and run it.

Update: I replaced the display field with a merge variable, which works better as it avoids focus issues and the keyboard popping up. Thanks to the commenter for the suggestion.

It’s the time of year when hopeful gadget manufacturers lay out their shiny new wares in the hope of a bumper Christmas season; so this evening I attended a multi-vendor press event for that purpose.

What I found both interesting and disappointing was the lack of innovation in what is on offer. There was table after table of iPod docks and USB drives. On the iPod side, it shows I guess the extent to which Apple has taken over the home hi-fi market as well as the portable market. Although Apple does not make the docks, it gets a royalty for use of its proprietary connector, as well as enhancing the value of its iTunes/iPod/iPhone ecosystem.

It is not quite all iPod. I did have a lengthy discussion with the man from Arcam about its new rDAC digital audio converter. “Don’t all DACs sound the same?” I asked him, whereupon he drew diagrams to convince me that there are still challenges in making a high fidelity DAC, that CD-quality sounds better and high resolution 24/96 audio better still through an rDAC. I am hoping to get a review sample in order to test his claims.

Another item that caught my eye was the 5.1 headphone set from Roccat, a Hamburg-based company you most likely have not heard of. The headphones are called Kave, are aimed at gamers – though I imagine they should also be fun for movies – and are not too bulky considering their six drives. They also include a microphone for live gaming, though they cannot connect to an Xbox without an adapter. I will be reviewing these – if they work as advertised, it is rather a good idea. Roccat also offers a range of gaming mice with extra switches and customisable lighting effects (honest). If you have the patience to set up commands and macros for the additional button combinations that are available I guess these can be productive for a variety of computing tasks, not just for gaming. Sorry Mac people; this one is Windows only.

I am not sure what FileMaker was doing at a predominantly consumer event; but I was glad to catch up a little with this Mac database business (owned by Apple). With both the Mac and the iPad increasingly making their way into business computing, FileMaker has the opportunity to grow its market share a little. FileMaker 11 has been out since March, and in the summer the company released FileMaker Go for iPhone and iPad. FileMaker Go is a client for FileMaker applications, and one of the things that intrigues me is that it does apparently run scripts that are part of the application. Doesn’t this breach Apple’s guidelines which prohibit runtime interpreters? It is a moot point, and  I suppose you can argue that FileMaker scripts are so specific to FileMaker database applications that it does not count as general-purpose scripting. Still, it strikes me as a sign of flexibility in Apple’s restrictions – unless it is only because FileMaker is owned by Apple and gets a special pass, which the man from FileMaker denied.

I took a quick look at the latest SSD (solid state drive) drives from Kingston and Buffalo. I would like to fit one of these in my netbook, for improved speed and battery life, but for a typical netbook, installing a 128GB SSD will more than double the price, so they are still a little expensive.

So what about all the USB and network attached storage, is there anything to say about it? Some of the portable USB devices have built-in encryption, which may be handy for businesses. “Try 10 times with the wrong password and the data is wiped,” one vendor told me proudly; I’m afraid I immediately thought of the case when it is your data and you have that forgotten the password.

I did like the storage solutions that offer access to files over the internet. Pogoplug is one; just attach a drive to the Pogoplug, connect the Pogoplug to your router, and then you can access your stuff from anywhere via the company’s web site. The innovation this year is a wi-fi model that no longer has to sit next to your router. There is even an iOS app for mobile access. You can also give access to specified external users.

Another variation on this theme is Hitachi’s LifeStudio, which supports backup to cloud storage. You get 3GB cloud storage free, with an option to purchase additional space by subscription.

Nuance was showing its Mac speech input application called Dragon Dictate. I have been trying Dragon NaturallySpeaking 11, which is most impressive, and spoke to Nuance about the difference between the two. According to the folk at the event, the Windows version is still a little ahead technically, but it is getting close.

Finally, VMWare and Parallels were there showing their desktop emulation solutions for running Windows on the Mac. VMWare showed me its physical-to-virtual utility, which lets you migrate your old PC to a virtual machine on your Mac. It is an excellent solution if you need to run Windows apps on a Mac.