When I attended the 2010 GPU programming conference hosted by NVIDIA I encounted Tidepowerd, which has a .NET library called GPU.NET for GPU programming.

GPU programming enables amazing performance improvements for certain types of code. Most GPU programming is done in C/C++, but Typepowerd lets you run code in .NET, simply marking any methods you want to run on the GPU with a [kernel] attribute:

GPU.NET is now at version 2.0 and includes Visual Studio Error List and IntelliSense support. This is useful, since some C# code will not run on the GPU. Strings, for example, are not supported. Take a look at this article which lists .NET OpCodes that do not work in GPU.NET.

GPU.NET requires an NVIDIA GPU with CUDA support and a CUDA 3.0 driver. It can run on Mac and Linux using Mono, the open source implementation of .NET. In principle, GPU.NET could also work with AMD GPUs or others via a vendor-specific runtime: 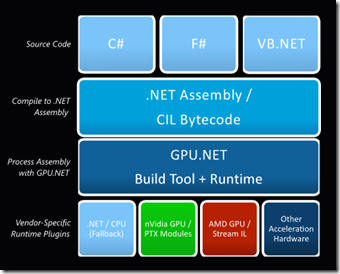 but the latest FAQ says:

Support for AMD devices is currently under development, and support for other hardware architectures will follow shortly.

Another limitation is support for multiple GPUs. If you want to do serious supercomputing relatively cheaply, stuffing a PC with a bunch of Tesla GPUs is a great way to do it, but currently GPU.NET only used one GPU per active thread as far as I can tell from this note:

The GPU.NET runtime includes a work-scheduling system which can distribute device method (“kernel”) calls to multiple GPUs in the system; at this time, this only works for applications which call device-based methods from multiple host threads using multiple CPU cores. In a future release, GPU.NET will be able to use multiple GPUs to execute a single method call.

I doubt that GPU.NET or other .NET libraries will ever compete with C/C++ for performance, but ease of use and productivity count for a lot too. Potentially GPU.NET could bring GPU programming to the broad range of .NET developers.

It is also worth checking out hoopoe’s CUDA.NET and OpenCL.NET which are free libraries. I have not done a detailed comparison but would be interested to hear from others who have.

Exhibiting here at the NVIDIA GPU Technology Conference is a Cambridge-based company called tidepowerd, whose product GPU.NET brings GPU programming to .NET developers. The product includes both a compiler and a runtime engine, and one of the advantages of this hybrid approach is that your code will run anywhere. It will use both NVIDIA and AMD GPUs, if they support GPU programming, or fall back to the CPU if neither is available. From the samples I saw, it also looks easier than coding CUDA C or OpenCL; just add an attribute to have a function run on the GPU rather than the CPU. Of course underlying issues remain – the GPU is still isolated and cannot access global variables available to the rest of your application – but the Visual Studio tools try to warn of any such issues at compile time.

GPU.NET is in development and will go into public beta “by October 31st 2010” – head to the web site for more details.

I am not sure what sort of performance or other compromises GPU.NET introduces, but it strikes me that this kind of tool is needed to make GPU programming accessible to a wider range of developers.