Developer recruitment company HackerRank has published a survey of developer skills. The first place I look in any survey is who took part, and how many:

HackerRank conducted a study of developers to identify trends in developer education, skills and hiring practices. A total of 39,441 professional and student developers completed the online survey from October 16 to November 1, 2017. The survey was hosted by SurveyMonkey and HackerRank recruited respondents via email from their community of 3.2 million members and through social media sites.

I would like to see the professional and student reponses shown separately. The world of work and the world of learning is different. This statement may also be incomplete, since several of the questions analyse what employers want, which suggests another source of data (not difficult to find for a recruitment company).

It is still a good read. It is notable for example that the youngest generation is learning to code later in life than those who are now over 35: 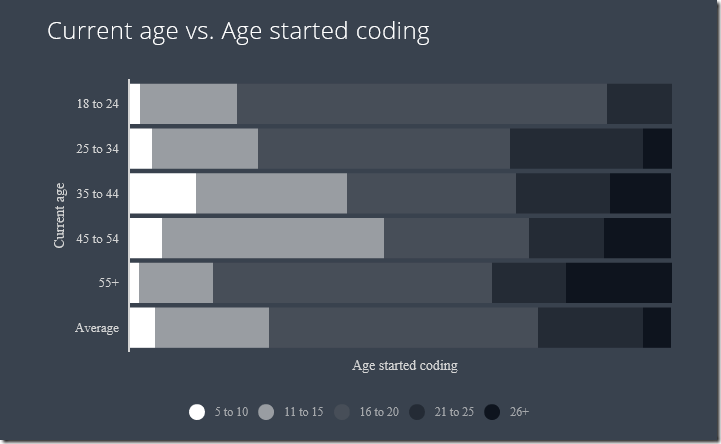 I am not sure how to interpret these figures, but can think of some factors. One is that the amount of stuff you can do with a computer without coding has risen. In the earliest days when computing became affordable for anyone (late seventies/early eighties), you could not do much without coding. This was the era of type-in listings for kids wanting to play games. That soon changed, but coding remained important to getting things done if you wanted to make a business database useful, or create a website. Today though you can do all kinds of business, leisure and internet computing without needing to see code, so the incentive to learn is lower. It has become a more specialist skill. It remains valuable though, so older people have reason to be grateful.

How do people learn to code? The most popular resource is Stack Overflow, followed by YouTube, with books coming in third. In truth the most popular resource must be Google search. Credit to Stack Overflow though: like Wikipedia, it offers a good browsing experience at a time when the web has become increasingly unpleasant to use, infected by pop-up surveys, autoplay videos and intrusive advertising, not to mention the actual malware out there.

No surprises in language popularity, though oddly the survey does not tell us directly what languages are most used or best known by the respondents. The most in demand languages are apparently:

If you ask what languages developers plan to learn next, Go, Python and Scala head the list. And then there is a fascinating chart showing which languages developers prefer grouped by age. Swift, apparently, is loved by 75% of those over 55, but only by 15% of those under 25, the opposite of what I would expect (though I don’t know if this is a percentage of those who use the language, or includes those who do not know it at all).

Frameworks is another notable topic. Everyone loves Node.js; but two of the frameworks on offer are “.NET Core” and “ASP”. This is odd, since .NET Core is not really a framework, and ASP normally refers to the ancient “Active Server Pages” framework which nobody uses any longer, and ASP.NET runs on .NET Core so is not alternative to it.

This may be a clue that the HackerRank company or community is not well attuned to the Microsoft platform. That itself is of interest, but makes me question the validity of the survey results in that area.

This means that compiler makers can get on with implementing the full C++ 11 standard. Most current compilers implement some of the features already. This Apache wiki shows the current status. A quick glance suggests that the open source GCC is ahead of the pack, followed by Intel C++ and then perhaps Microsoft Visual C++.

C++ 11 is pretty much compatible with C++ 03 so existing code should still work. However there are many new features, enough for Bjarne Stroustrup to say in his feature summary:

Surprisingly, C++0x feels like a new language: The pieces just fit together better than they used to and I find a higher-level style of programming more natural than before and as efficient as ever. If you timidly approach C++ as just a better C or as an object-oriented language, you are going to miss the point. The abstractions are simply more flexible and affordable than before. Rely on the old mantra: If you think of it as a separate idea or object, represent it directly in the program; model real-world objects, and abstractions directly in code. It’s easier now.

Concurrent programming is better supported in C++ 11, important for getting the best performance from modern hardware.

It is curious how the programming landscape has changed in recent year. A few years back, you might have foreseen a day when most programming would be .NET, Java or JavaScript: all varieties of managed code. While those languages do still dominate, native code has come more to the fore, thanks to factors like Apple’s focus on Objective C, and signs of internal conflict at Microsoft over the best language for coding Windows applications.

That said, C++ 11 remains a demanding language to learn and use. As Stroustrup notes, since C++ 11 is a superset of C++ 98 it is technically harder to learn all of it, though new libraries and abstractions should help beginners. The reasons for using or not using C++ are not going to change significantly with this new standard.