I have an Asus/Google Nexus 7 which is set up to receive mail from Exchange 2010.

At least, it was. Some time ago it stopped receiving mail. When the mail client tried to sync, I got this message:

“Couldn’t open connection to server due to security error”.

The message is not particularly clear. I went back into the account settings and verified everything (including Accept all SSL certificates, since mine is self-signed) and it was all fine – as I knew it would be, since it used to work.

I removed the account and added it back. Ah, now I have this dialog: 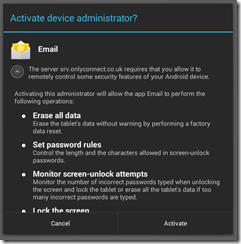 I tapped Activate and everything was fine. Mail now syncs again.

I am still not sure how you find this dialog if it does not pop up automatically.

I thought the Google Nexus tablet was good value, and compared to an Apple iPad or most other tablets out there it is, but for sheer capability on a budget a desktop PC has it beat.

Needing a cheap desktop I went along to Ebuyer and purchased the following:

The total cost was £128.54 with free delivery. I then plucked a Sata DVD drive and a 200GB hard drive from a dead server, and put it all together, which took less than an hour. Next installed Windows 7 64-bit, for which fortunately I have a subscription license. Plugged in spare keyboard, mouse and monitor.

I was impressed by the Windows Experience Index of 4.9, and Gaming graphics of 5.6 achieved by Intel’s integrated graphics. The board has VGA and DVI ports and supports dual displays. It also has HD audio and of course ethernet networking.

Still, I’d bet that the average household has at least some reusable bits lying around.

The real point is how capable even a budget box like this turns out to be. The RAM is upgradeable to 16GB.

The dark side to all this is that the value of your old PC has plummeted since you bought it three or four years ago, and faults beyond the trivial are hardly worth repairing.

Finally, I should mention Raspberry Pi. The board complete with CPU, networking and graphics is £25.92. Add case, 4GB storage, power, keyboard, mouse, and HDMI monitor though, and my quick price for the complete system is £147.81, mostly for the monitor (Benq 21.5” HDMI). Of course there are many creative uses for a Raspberry Pi without buying a monitor.

My vote still goes to the PC for the best productivity on a budget.

PS let’s not forget the cheapest Mac, currently a Mac mini at £529. OS comes with it, but only 2GB RAM, no mouse, keyboard or monitor. Add those and it is over £600.