Today Microsoft and Barnes & Noble announced a partnership to sell eBooks, based on the existing Banes & Noble digital bookstore and eBook reader called the Nook.

The new subsidiary, referred to in this release as Newco, will bring together the digital and College businesses of Barnes & Noble. Microsoft will make a $300 million investment in Newco at a post-money valuation of $1.7 billion in exchange for an approximately 17.6% equity stake. Barnes & Noble will own approximately 82.4% of the new subsidiary, which will have an ongoing relationship with the company’s retail stores. Barnes & Noble has not yet decided on the name of Newco.

In addition, Barnes & Noble, which was in litigation with Microsoft over the Redmond company’s claim to royalties on Android, has agreed to a “royalty-bearing license” for the Nook eReader and tablets. Both the Nook Color and the Nook Tablet are based on Android. 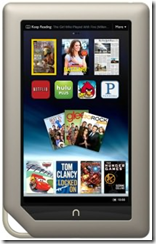 Another detail is that there will be a Nook application for Windows 8:

though the release does not state whether or not this will be a Metro app. I would guess that it is, since otherwise it would not work on Windows RT (the ARM version of Windows), but nothing can be taken for granted.

Note that Barnes & Noble already has Nook apps for iPad, iPhone, Android, Windows and Mac, but not for Windows Phone.

It is an intriguing deal. Has Microsoft just taken a 17.6% stake in an Android company, or is there some plan in the works to base a future Nook on Windows?

As an attendee at developer conferences, I regularly see the Nook developer evangelists, and had a look at last year’s Adobe Max. Barnes & Noble claim that Nook apps sell relatively well, compared to apps on the official Google Play market, because Nook customers expect to pay for their content. The Nook is not an officially Google-blessed Android device, so has no access to the Play market.

If a future Nook is Windows-based, Barnes & Noble will have a tricky time explaining to developers why they will have to port their apps.

Overall this is a hard deal to interpret. Barnes & Noble was a thorn in Microsoft’s side with its resistance to Android royalties, a thorn which has now been removed, but what else does it signify? You would have thought there would have been a Nook app for Windows 8 anyway, unless it is a complete flop.

I took a quick look round the exhibition here at Adobe MAX in Los Angeles, and was intrigued to see crowds round the Barnes & Noble Nook stand, a newcomer to Max. 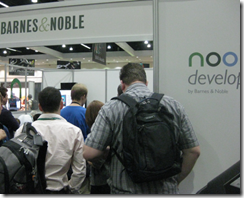 Barnes & Noble has its own app store for Color Nook, the AIR runtime is on the device, and in fact is used for some of the built-in apps. It is not the most powerful of tablets, and it only has wi-fi for internet connectivity, but nevertheless is proving a worthwhile market for apps. The store is curated to maintain quality, and one of the points made to me on the stand is that owners expect to pay for their content, making it easier to sell paid-for apps. 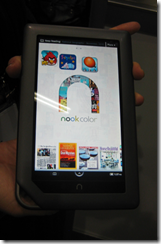 Unfortunately this device is not available globally, and of course everyone is waiting to see what impact Amazon’s Kindle Fire will have on Nook’s sales. Even so, for developers who have a suitable app this is a significant market.